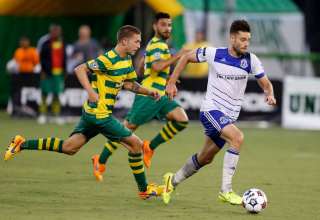 Ritchie Jones in action against Tampa Bay in 2015. PHOTO: NASL

For both Jones and Ameobi — who have had well-travelled soccer careers — the decisions to stay in Edmonton were easy to make.

“I’d always said Edmonton felt like home,” said Ameobi, who is the joint top-scorer on the team with seven goals this season. “When they told me they wanted to extend my contract it wasn’t something I had to deliberate long over. I went home, talked to my family, prayed about it, and I felt like this was the place I was meant to be.”

Ameobi has played in Iceland. He’s played in Finland. He’s played for a number of English teams. He’s never spent more than two years at any club he’s been with since his days of youth football. With a two-year extension set to keep him in Edmonton till the end of the 2017 season, he now has a sense of continuity he hasn’t previously enjoyed in his career.

“This is first place since I was at Leeds that I genuinely felt settled. I always hopped from place to place. And it was good, I got to experience different cultures, different leagues. But the way the team [FC Edmonton] shaped up, it’s very family-oriented. We look out for one another, that’s something I missed over the years.”

Ameobi says he has pondered the idea of making Edmonton his permanent home after his playing days are over.

“It is something I have considered. It’s just about seeing what opportunities come up after football and then I make my decision closer to that time. But I’ve got a few good years left in me yet.”

For Jones, who played for a number of English teams after coming out of the Manchester United program, the style of play in North America is better for him than the English game.

“It’s been great here since I came over from England, with the gaffer bringing me over here, which I appreciate a lot. It’s my second season, I’m really enjoying it.

“In England, I tended to move around a few clubs over there. But I think it more suits me as a player over here, no disrespect, but in England it was bit more in the air with the ball. But, as soon as I came over here, the way we played was pretty much technique and on the floor and it’s been more enjoyable for me.”