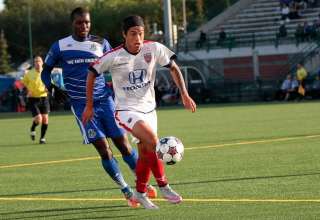 FC Edmonton beat Indy 2-0 when they met at Clarke Field earlier in the fall season.

When FC Edmonton travelled to Indiana for its final game of the NASL spring season, the team was depleted. Defender Mallan Roberts and midfielder Lance Laing were away on international duty. The team was ravaged by injuries.

And that skeleton squad found itself on the wrong end of a 3-0 hiding.

But, while the team isn’t currently 100 per cent healthy, the 11 men coach Colin Miller will put on the field Saturday to face the Indy Eleven will be at least something close to representing a first-choice team.

“It was a shadow of a team that we brought in earlier this year, and we came up with our worst performance away from home that we’ve had all season,” said Miller.

Miller said that midfielder Thiago de Freitas is set to miss his third straight game with a hamstring problem. Defender Kareem Moses had a bit of a setback in his quest to return from injury and his status is still uncertain. Striker Tomi Ameobi, who hurt his knee in training last week and didn’t play in Sunday’s win over the Tampa Bay Rowdies, trained on Wednesday. Midfielder Ritchie Jones, who had also been on the shelf, is good to go.

Miller said the key will be finding ways to limit Dane Richards, the former New York Red Bulls and Vancouver Whitecaps attacker who was brought into the Eleven’s fold earlier this season.

“Indy is a very good side when they are at home, and they have a very good player in Richards up front. He is a player with English Premier League pace. He’s been a dangerous player throughout his career.”

And Miller is hoping he sees an Edmonton team that’s similar to the one that beat Indy 2-0 at Clarke Field earlier this fall season, not the one that lost by three goals in Indianapolis to close out the spring campaign.