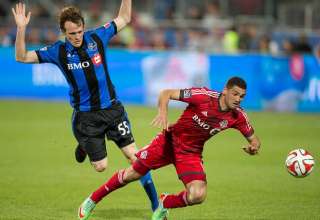 If there’s one thing that this year’s Amway Canadian Championship has taught us — it’s that you can’t possibly figure out the Montreal Impact.

The Impact got a positive result, a 1-1 draw against Toronto at BMO Field, in Wednesday’s first leg of the Amway Canadian Championship final. But how the Impact got there was anything but straightforward.

For the entire first half, the Impact looked as if it was doing it’s best not to threaten Toronto’s goal. Yes, it was a bit of a shock to have Nelson Rivas come back from a lengthy injury spell, make his first touch in the second minute, shake his head, and then leave the field. But professionals need to recover and focus.

Sure, the first-half possession was 50-50 but, in terms of attacking thrust, the Impact looked like a team that was disinterested. Zero shots were on the TFC frame, while Doneil Henry scored off a corner give the hosts the deserved lead.

Henry’s goal came as a result of no one on the Impact bothering to mark him.

How bad did the Impact look? At one point, on a short corner, Justin Mapp and Hernan Bernardello somehow found a way to make a pass and lose the ball thanks to an offside call. The inattention, heck, the downright laziness, was evident.

The second half began and, click, the Impact players looked like they’ve all successfully managed to defeat the robot doubles who had played in their place in the first half. Sure, coach Frank Klopas brought Jack McInerney in to join Marco Di Vaio in the attack — and the two-forward setup changed the Impact’s shape.

But the turnaround in the team’s play was about a lot more than a tactical change. It was an attitude change. And that’s what makes that Impact so baffling. The team is like the kid in grad school who, on the schoolyard, says “OK, now I’m really gonna try now!”

A minute in, Bernardello made a slick pass to Andres Romero, the chance was thwarted, but Bernardello hustled to retrieve the ball, and lofted a shot that struck the bar. Montreal had life. And hustle.

Later in the second half, Dwayne De Rosario’s effort that could have given TFC a 2-0 lead struck the underside of the bar and, somehow, stayed out. But that shot wasn’t indicative of any sort of TFC second-half dominance. Jernain Defoe’s presence on the bench was evident, not because of De Rosario, but thanks to Gilberto’s uncanny ability to lose the ball and have attacks die at his feet. Soon, Gilberto will make some wonder if he really will come around and start banging in goals or if he’ll go down as another Pablo Vitti.

But Montreal kept coming. Mapp began to dance down the left side. Di Vaio started beating TFC defenders to balls in the middle. There was a shout for a handball call against TFC defender Steven Caldwell that went unheeded by referee Silviu Petrescu. In fact, the Impact had two shouts against Caldwell in the game, but you get the feeling that it would take a shooting, or worse, for either team to earn a penalty in the final. After all the gnashing of teeth and controversy over the penalty calls in the FC Edmonton-Montreal semifinal, you wouldn’t blame a referee for being gun-shy about pointing to the spot, even if he’s 99.9 per cent sure a foul was committed.

Finally, though, TFC was undone by Mapp, who dashed in from the left, cut across the top of the box and curled in the precious road goal that gives the Impact the advantage going into the second leg.

After the goal, Montreal had the best chance to win it, but Di Vaio couldn’t adjust to head a cross towards goal after he had lost TFC defender Justin Morrow in the box.

The on-off Impact simply continue the infuriating and baffling pattern that we saw against FC Edmonton. The Impact was clearly second best during the second half of the first leg, and came home trailing the NASL side, 2-1. The Impact then dominated the first 60 minutes of the second leg, took a 4-2 lead on aggregate and, then, totally switched off. Two FC Edmonton goals later, and the Impact had to scramble to find a gear, to try and salvage the tie — which came with the 96th-minute penalty call.

When you pay to watch the Impact, or tune in to see the club on TV, chances are you’ll be treated to two or three or maybe 20 different types of performances within 90 minutes.