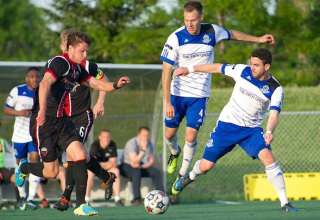 Last year, as a member of the Vancouver Whitecaps, Tom Heinemann scored an Amway Canadian Championship goal against FC Edmonton.

In 2014, injuries kept him from playing for the Ottawa Fury in the 2014 Voyageurs’ Cup. He could only watch as the Eddies beat the Fury 3-1 on aggregate.

But, on Saturday, Heinemann came in as a second-half sub, his first appearance in a Fury shirt — and he allowed both himself and his club to have a measure of revenge on the Eddies. In the 89th minute, off a free kick from Richie Ryan, Heinemann was able to get position on FCE defender Lance Laing. The ball looped off Heinemann’s head and into the back of the net, giving the Fury a 1-0 win.

“I am not debating that was a free kick for Ottawa; but, I think, before that happens, there is a clear free kick for us in the sequence leading up to it. But it was just another horrendous decision by another horrendous referee. No, we didn’t defend it well, but I thought the guys put in a terrific shifts and deserved at least a point from the game.”

While neither the Eddies or Fury will challenge for the NASL spring season title, the win puts the Fury — a team new to the league — five points ahead of the established Eddies in the standings.

And, up till the 89th minute winner, anyone watching the game had to wonder how the heck it has remained scoreless for so long. The Fury started off quickly and could have had a couple of goals in the first 20 minutes. In the end, both teams spurned several excellent looks at the goals.

“Ottawa had good chances, we had good chances, and I thought both teams were going for it.” said Miller. “The guys are gutted to lose it in the last minute of the game. They’ve locked themselves in the dressing room so they can have a talk about it.”

In the second minute, Tony Donatelli’s shot stung the hands of Eddies’ keeper John Smits. In the 12th, Smits came out for a corner, missed it, and the ball went off the body of the Fury’s Mason Trafford. But the ball took a high bounce off the turf and went just over the bar.

But the Fury kept coming, and fullback (and Ottawa native) Edson Edward was forced to make a last-ditch dive to stop Ottawa forward Carl Haworth front busting in on goal.

The Eddies’ Neil Hlavaty pounded a shot from distance that required Fury keeper Devala Gorrick to palm the ball away from goal, but then Ottawa hadtwo more outstanding chances to open the scoring. Donatelli got behind the defenders, came in clear on the Edmonton keeper, but Smits blocked the shot, and central defender Kareem Moses scurried away the rebound. Then, Haworth’s shot was blocked in the box by a sliding Moses; the ball struck Moses’s arm, which was raised as he was making the slide. But, despite Ottawa protests, no call was given.

“We had a good first half, we were the most dangerous team,” Ottawa coach Marc Dos Santos said during the halftime TV interview. “It’s a game that’s going to ask a lot of patience from us.”

Edmonton had a couple of god chances in the second half; a shot by Hlavaty was blocked in the box by Ottawa right back Philippe Davies, who did stellar work in shutting down FCE teenager Hanson Boakai. And Daryl Fordyce, who came on as a sub for Frank Jonke, who tweaked his hamstring, had an attempt saved by Gorrick. Edmonton had a shout for a penalty after Davies brought down Hlavaty, but that went unheeded

Ottawa actually had the ball in the back of the net earlier in the second half, but Oliver Minatel clearly raised his arm to direct the ball into the goal, and received a deserved yellow card for the Hand of God attempt. It was a foolish decision by the Brazilian, as the ball would have fallen into a crowded penalty area and, who knows where it could have gone?

The Eddies wrap up the spring season next week, when the Carolina RailHawks visit Edmonton. The Eddies are winless at home in NASL play.

And the Eddies have got just one point in three league matches since the team was turfed out of the Voyageurs’ Cup on a last-second controversial penalty decision in Montreal. But Miller brushed aside any talk of a Voyageurs’ Cup hangover.

“No, the players are well over it. We are a tight group. It’s going to turn around soon.”