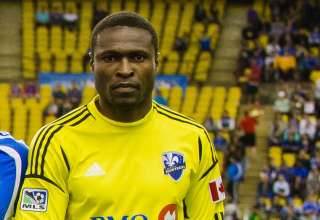 Jamaican broadcaster RJR (click here) is reporting that Montreal Impact goalkeeper Donovan Ricketts has a damaged patella and will miss the “next few” World Cup qualifiers.

If that is indeed the case — and, the Jamaican Football Federation has yet to provide an official update on Ricketts — that would mean that Greg Sutton would likely take over as the Impact’s keeper through the summer. The “next few” World Cup qualifiers would mean that the injury would keep him out for most of the summer. The JFF did confirm via Twitter than Ricketts suffered an injury to his right knee, but said it is still waiting to see how severe the injury is.

Without any contact, Ricketts came out of Jamaica’s 2-1 World Cup qualifying win over Guatemala. After just 20 minutes, he needed to be stretchered off the pitch.

Ricketts also didn’t make it through the Impact’s most recent game before the international break. Sutton came during the second half of the Impact’s 3-2 loss to Colorado three weekeneds ago, and surrendered the bizarre winning goal.