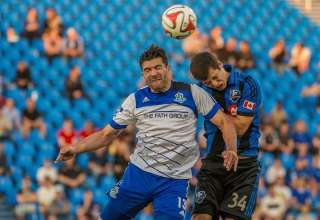 For 95 minutes, the Montreal Impact and FC Edmonton staged a thrilling Amway Canadian Championship match, one that showed those cynical about cup competitions that there is indeed some magic to these midweek games.

The situation: The Impact led the Eddies 3-2 in the second leg of their semi-final matchup. But, the aggregate was at 4-4, with the Eddies ahead on the away-goal rule. Six minutes of time were added on, as the Eddies were certainly milking a few, ahem, injuries down the final 20 minutes.

A free kick was played into the Eddies’ box, it was deflected by Impact defender Heath Pearce, about a couple of feet away from FCE centre back Mallan Roberts. Fearing a handball call, Roberts had his hands behind his back. The ball hit Roberts on the shoulder/upper arm, and Fischer decided to point to the spot. Did Roberts try to play the ball with his arm? He had his hands behind his back. Could he have avoided a ball that was deflected by Pearce a couple of feet away?

Patrice Bernier buried the penalty kick. And, the cameras showed a full Eddies team accosting the refs after the game in a way that reminded you of that time after the 2007 Gold Cup, when the Canadians had a winning goal at the death waved off for a phantom offside call — and the Americans got through. Finally, we saw FCE coach Colin Miller and Montreal Impact owner Joey Saputo trading heated words. After the game, Miller joked that he wished Saputo a ”Merry Christmas and a Happy New Year.”

“The guys in the dressing room are broken-hearted,” Miller said over the phone after the match. “We knew we deserved better from the game. We are devastated. The players are devastated and the technical staff are devastated. I feel so bad for our fans and our owner.

Of course, Impact supporters will point to the fact that Fischer, just before the 90th minute, decided to award a free kick rather than a penalty after FCE defender Albert Watson had fouled Sanna Nyassi right on the white line, with both players falling into the box afterwards. And they’ll also say that the penalty kick that Frank Jonke buried to complete an FCE comeback was harsh on the Impact.

Let’s rewind to the start of the match. It took just nine minutes for the Impact to erase the Eddies’ lead going into the second leg. By the 15-minute mark, the Impact had got its second goal and all of the fretting that had taken place over the last week was quickly forgotten.

“We had gone in with the plan that we needed to keep them off the scoresheet for the first 20 minutes, and we were down two goals,” said Miller.

Impact coach Frank Klopas inserted Justin Mapp and and Felipe into the starting lineup, player who didn’t even make the trip to the Alberta capital last week. And both had major, ahem, impacts on the match.

In the ninth minute, Mapp barged down the wing, blew around Eddies’ left back Lance Laing, and drove a low cross into the Eddies’ penalty area. The cross deflected off Felipe and went right to Jack McInerney, who finished with a low shot to the corner of the goal.

The second goal was one part inspiration by the Impact, and two parts foolishness by the Eddies. FCE’s Mike Banner, who had come into the centre of the park for the suspended Ritchie Jones, had gone off with a knee injury, and Eddie Edward — normally the team’s starting right back — was being prepped as a sub. But, still with only 10 men on the field, the Eddies put the ball in play on a free kick. The Impact won the ball, Sanna Nyassi dashed down the field and broke across the top of the box, beating FCE defender Kareem Moses, who fell down. Nyassi slotted the ball to Mapp, who then side heeled it to McInerney, who blasted a low shot into the goal.

Just after halftime, Jeb Brovsky scored off a corner. The Impact was up 3-0 on the night, 4-2 on aggregate, and it was done, right?

At about the one-hour mark, with the Impact comfortable, it was clear that something had changed. The Impact switched off. First, FCE teenager Hanson Boakai pounced on a turnover and placed a shot just wide off the post. A couple of minutes later, he threaded a ball into the box for Frank Jonke, who lifted the ball over keeper Evan Bush to make it 3-1.

And, in the 70th minute, Fischer called a penalty on the Impact’s Karl Ouimette for putting his arms around Neil Hlavaty in the box. Jonke drilled home the penalty and, suddenly, Edmonton was in the winning position.

The Eddies, playing their eighth match in less than four weeks, hung on, collapsing in front of goal. The Impact had possession, but had cross after cross cut out, shot after shot blocked. Bernier had a free kick late in the second half that keeper John Smits punched away.

And, just as Eddies’ fans were hoping to hear the referee’s whistle to end the game, he pointed to the spot.
And, instead of celebrating a Cup tie that might have been the best in the history of the Voyageurs Cup, Twitter is filled with conspiracy theories and insults aimed at officials.