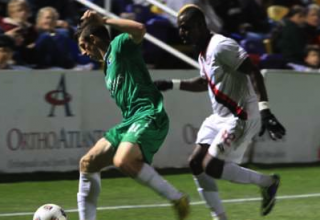 Horace James in action against the New York Cosmos.

Jamaican speedster Horace James has joined FC Edmonton on trial, while local product Jordan Ongaro will get another week to prove he has what it takes to make the club.

But former U.S. U-20 player Brandon Manzonelli’s trial with the Eddies did not lead to a contract offer, and he has left camp.

Coach Colin Miller said trialists are being brought in little by little, as he wants to avoid a “gong show” where all of the hopefuls are on the field at once, which hurts the team’s ability to estimate their worth.

Miller said James, a former Atlanta Silverback, gave fellow Jamaican (and FC Edmonton left back) Lance Laing a difficult time when the teams met at Clarke Stadium last year. James contacted the Eddies looking for a trial, after Laing recommended the team to his countryman.

James scored against the Eddies in a 1-1 draw at Clarke Stadium last August, though replays showed that the ball hit his arm before he went in on goal.

“He can run like a deer,” said Miller. “We just have to see if he can play at the level we require.”

Meanwhile, Miller was frank in his assessment of Ongaro. Based on the Edmonton native’s performance last week, he wouldn’t make the Eddies. But, the team has given the former San Diego State University standout and PAC-12 scoring leader another week to prove his worth.

Ongaro was cut by the Impact just a couple of weeks into his first MLS camp. He was selected in the fourth round of the MLS SuperDraft by Montreal.

“We’ve given him another week he’s got a lot to do if he wants to stay,” said Miller. “The first week was not at the level that we require.”

Miller said he spoke with Ongaro about what’s needed, and the player deserves credit for taking on the challenge rather than deciding to leave camp. Miller said that Ongaro was able to shake the coach’s hand and accept he has lots of work to do. And that does speak to the player’s character.

More offensive minded players are coming in on trial, and FC Edmonton have two international slots left to fill.