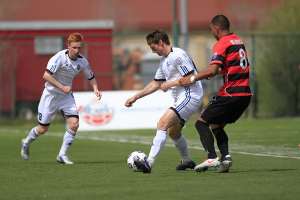 It’s hard to think of a team at any level of professional sports that gets to a championship game and then has its roster blown up for a full-scale rebuild. But that’s what happened to the Atlanta Silverbacks; the team won the NASL spring title in 2013, and with it the right to host the Soccer Bowl.

The Silverbacks lost a one-goal game to the New York Cosmos, decided by a Marcos Senna wonder-strike. Their reward? Soon after being named NASL coach of the year, Brian Haynes was dismissed; and more than half of the team’s core made the decisions to move on. Danny Barrera and Richie Menjivar went to San Antonio. Goal of the year scorer Pedro Mendes left for the Indy Eleven. Keeper Joe Nasco moved up to MLS, with the Colorado Rapids.

And the Atlanta diaspora also had an impact on FC Edmonton, as midfielder Milton Blanco, a former PDL MVP and Chivas USA player, made the move to the Eddies. And quick-footed Jamaican striker Horace James finds himself in Edmonton on trial.

Blanco will try and use his vision to unlock the opposition’s defences, providing balls for strikers such as Daryl Fordyce and Frank Jonke.

Blanco spoke with The 11 after FCE’s training session Tuesday at Commonwealth Fieldhouse.

“Yeah, there were a lot of changes in Atlanta,” he said. “I think maybe five or six starters left. But, I look at it as there’s a chance for the younger guys there to take advantage of their chances.

“There were a lot of things going on in Atlanta. And the team wasn’t making decisions on a lot of the guys. And some of the guys opted for a change of scenery. That’s part of professional football. But they fired Brian Haynes, who won coach of the year, and it gave the impression that things were not very stable.”

FC Edmonton coach Colin Miller thought highly of Blanco. Last season, when the Eddies faced the Silverbacks, Miller stressed the importance of marking the American midfielder out of the game. And he was more than pleasantly surprised when Blanco made contact with him in the off-season. “

For him to contact us and tell us that he wanted to come here, that’s a real compliment to the club,” said Miller. “That was one of the things that attracted him to us, that we were the hardest team in the league to play against.”

In fact, Blanco said that, in Atlanta, Haynes would often use FC Edmonton as an example of the work ethic he expected out of his players.

“Sometimes, when you lose a game, you can still say that you passed the ball well, that you just missed your chances, but you did some good things. But Brian would tell us that if we only worked as hard as FC Edmonton did, nobody could beat us.

“Edmonton is a club that I’ve admired. I admire how they play and the work that Colin and (assistant coach Jeff Paulus) Jeff do.”

And Blanco knows that the Eddies — who boasted one of the league’s best defensive records and have actually strengthened themselves in the back with the addition of Trinidad and Tobago defender Kareem Moses — could just average 1.5-2 goals a game, they would contend for honours at the end of the season. The Eddies’ issue is that they have been at the bottom of the league in terms of goals scored over the last two campaigns.

“It can all come together,” said Blanco. “Colin told me that they were bringing in (midfielder Mike Banner) Mike, Frank (Jonke) and Ritchie (midfielder Ritchie Jones, a former Manchester United prospect). We already know Edmonton will be very hard-working. We know Edmonton will be hard to score against. If we can just average a goal and a half per game, we’ll be difficult to beat.”

Like Blanco, James reached out to Miller for the chance to try out. And Haynes endorsed James when Miller asked about the Jamaican striker. A friend of left back Lance Laing, James knew that Edmonton could be an option.

“Lance, he was always saying to me about coming to play with him in Edmonton. He wanted me to check it out. And I wanted to do something new with my career. I am ready for the next challenge. I think I’ll be able to fit in just fine.”

Now, James has that chance. He scored at Clarke Stadium for the Silverbacks last year; if he sticks, he’ll have the chance to score for the home team, this time.