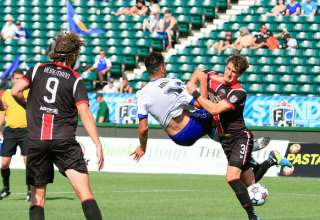 Memo to FC Edmonton players: Tuesday’s training session is going to be a hellish one, indeed.

Coach Colin Miller promised that his players would be doing a lot of running at that training session after the Eddies laboured to a 0-0 draw with the Ottawa Fury at Commonwealth Stadium. The Eddies went up a man in the 56th minute after Ryan Richter, making his Fury debut after being loaned out from Toronto FC, was sent off.

But it wasn’t till late in the game that the Eddies were able to create any real chances. In the 87th, Hanson Boakai had a shot deflect off the foot of Fury defender Mason Trafford and strike the post. Then, in time added on, Horace James’s header off a corner kick also hit the woodwork.

You could argue that the posts were a sign of bad luck, but Miller wasn’t buying it. He was furious at his team for being offensively ineffective, especially with more than 30 minutes of playing time with a man advantage.

“This is the angriest I’ve been since I’ve been at FC Edmonton,” Miller said.

Most of the game was played at well less than normal speed, as the pitch side temperatures hit 35 C, before the humidity was factored in. On a brilliant, sunny day in Edmonton, Environment Canada had the game time temperature at 26 C. But, artificial turf and its rubber pellets have a tendency to absorb and reflect heat. So, at pitch side, the turf added nearly 10 C to the temperature, making for a sweltering slog in hellish conditions.

“The heat was a major factor,” said Ottawa coach Marc Dos Santos. “The one quality both of these teams have is their intensity, and the heat took that away a bit.”

There was only one real chance of note in the first half; Beto Navarro, making his debut at centre back for the Eddies after being acquired Saturday from Atlanta, collided with Trafford on an Ottawa free kick in the box. Both Navarro and Trafford pushed back into FCE keeper John Smits. Meanwhile, the ball skidded away and rolled off the post. Navarro was able to get up and scramble it away.

Navarro wasn’t the only Eddie making his debut with the club. Midfielder Cristian Raudales also got a start.

At halftime, our FCETV crew had to deal with field-side microphones which had broken down in the heat. In the truck, the air conditioning failed and the production crew had fans blowing over ice laid on the floor. Still, the temps in the truck got to over 40 C, and warning beeps were coming from many of the components.

But, in the 56th, it looked as if Edmonton would be able to use the heat to its advantage. Richter, already on a yellow for fouling Frank Jonke in the first half, misplayed a ball off his chest and then off his leg. Because Richter lost control, Jonke tried to pounce on the loose ball. Richter reached across Jonke to hold him back — and got a second yellow for it.

Dos Santos said his team then knew that it would need to grind out the final 30-plus minutes to try and escape with the draw.

“We knew that we had to suffer, and we did suffer.”

While Dos Santos said the heat was a major factor, Miller wouldn’t have it. He was frustrated that the Eddies didn’t really show any life till Boakai came in as a late sub. He pointed to this weekend’s MLS action, with Chivas taking advantage of a 10-man Whitecaps side, winning 3-1.

“It’s en excuse. I’ve played in heat. It’s about playing with passion, about wanting it more. Ottawa didn’t create anything, they were trying to kill the clock. But it took until we put in a 17-year-old for us to create anything. Look at the Chivas game vs. Vancouver last night, Chivas won because they wanted it more.”

Now, Miller will likely turn up the heat in training.

Attendance for the game was announced at 3,609, but it certainly didn’t look like that many fans had made it to Commonwealth to suffer in the heat, in a game that kicked off just 15 minutes after Germany had won the World Cup. Hopefully the team and league will learn that nothing should try and compete with the World Cup. Even though the FCE game kicked off three hours after the World Cup final kicked off, there was still too much overlap.

FCE had to play this game at the 56,000-seat Commonwealth Stadium because the installation of the new turf at Clarke Stadium, the team’s regular home, was not yet complete.