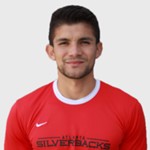 In 2013, the Atlanta Silverbacks shocked the NASL by winning the spring season title and earning the right to host the Soccer Bowl.

Now that defender Beto Navarro has joined FC Edmonton, that makes three members of that Silverbacks team who are now Eddies. Midfielders Milton Blanco and Horace James joined the Eddies at the start of the season. Navarro, a centre back, has been acquired by the Eddies just in time to be eligible to play in Sunday’s fall-season opener against the Ottawa Fury.

Navarro started in last year’s Soccer Bowl, after playing 25 games in the regular season for a total of 2222 minutes played.

Navarro played in three league games for the Silverbacks in the 2014 spring season, but also appeared in four U.S. Open Cup matches.

The Eddies have confirmed that Navarro was acquired via transfer, but would not say how much was paid to the Silverbacks for the defender.

The Eddies now have made three additions to the club during the NASL’s hiatus: Navarro joins midfielder Cristian Raudales and forward Chad Burt, whose deal was made official on Friday.