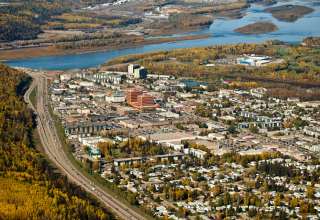 FC Edmonton announced earlier this year that it would be playing an NASL match in Fort McMurray in the 2015 season.

Now, the team says that it’s likely that two or three league games will be played in Canada’s oil-sands territory next season.

The number of games FCE would play in Fort Mac would depend on when the NASL schedules its break between the spring and fall seasons. But, as of right now, the team has indicated that it looks like at least two dates in June could go to Fort Mac. That could go as high as three.

The league does not want to put FCE on a six-game road trip (again, depending on the break) when the Women’s World Cup comes to Canada. Of course, the WWC also brings up issues for the Ottawa Fury and its stadium, TD Place.

But, after talking to FCE’s brass today, it’s clear that there isn’t much fretting about needing to go up to Fort McMurray, which is 435 km northeast of the capital. Fort McMurray gives the team access to some of the most powerful potential sponsors in the country. And getting soccer onto the radar of Canada’s oil producers could be a major coup for the NASL and for the game in this country. But to get soccer onto the radar of the oil sector, you need to bring the pro game to its backyard.

According to the Canadian Association of Petroleum Producers, the oil sands produce 885,000 barrels of oil per day, and the revenue generated by the industry was nearly $50 billion per year. It’s an industry that badly needs to improve its image, and what better way than to promote the improvement of soccer in Canada? It would serve the likes of Suncor and Syncrude so much more to get behind sport than it would to try ad campaigns that don’t change opinions of oil-sands opponents.

There are direct flights from Denver to Fort McMurray, so the games shouldn’t pose too much of an issue for the road team.