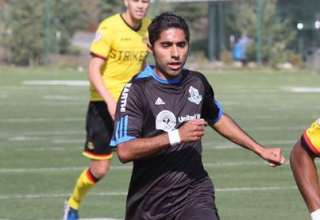 One of the brightest prospects to come out of CIS has had his career derailed by injuries. And, on Tuesday, FC Edmonton announced that the club and midfielder Gagan Dosanjh had agreed to part ways.

Dosanjh was a key part of the University of British Columbia side that went undefeated and won the CIS title two seasons ago. He was coveted by Eddies’ coach Colin Miller, who worked with Dosanjh when the player was a youth in the Abbotsford system.

Dosanjh trialed with the Eddies before the 2013 season and impressed the coaching staff, but a signing was delayed so Dosanjh could finish out the school year. He joined the team in time from the fall season, but was recovering from a knee injury. He played just five games until the aftereffects of the knee surgery forced him to stop playing.

Expectations were that he would play this season, but the knee hasn’t been good enough to let him get on the field.

In the end, it was a calculated risk for the Eddies to sign a player for the 2013 fall season who had to have surgery the month before the contract was finally done.

“I would like to thank the FC Edmonton organization from top to bottom, they are a first-class organization and the sky is the limit for them,” said Dosanjh in a statement given to the club’s website. “I would also like to thank the coaches who believed in me from day one and I know they are creating something special at this club. To my teammates, I wish nothing but the best to such a great group of guys, you have a new fan.”