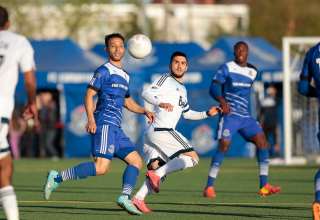 Last year, it was a 96th-minute Patrice Bernier penalty that gave the Montreal Impact a last-gasp semifinal win over the Eddies. On Wednesday, Whitecap substitute Matias Laba rolled the ball across the goal line in the 96th minute of the semifinal’s second leg, punching Vancouver’s ticket to the final.

The final score at Clarke Stadium; Whitecaps 2, Eddies 1 — with Vancouver taking the semifinal 3-2 on aggregate.

The goal came after the Eddies couldn’t deal with a free kick that dropped into the penalty area, and the ball was poked across the goal line by Laba.

“I ‘d have to see it again, but it looked like it went through a ruck of players and through Matt’s (keeper Matt Van Oekel) legs,” said FCE coach Colin Miller after the game.

The goal came just after the Eddies got a 91st-minute penalty-kick equalizer off the foot of Tomi Ameobi, who became the all-time leading scorer in the history of the Canadian Championship — since the tournament format was adopted. The crowd of 3,803 — save for a few dozen Whitecaps fans — uttered the loudest roar ever heard at an FCE home game after Ameobi’s effort hit the back of the net. For the striker, it was the seventh straight game in which he’s scored.

But, he’d trade all the individual accolades just to see Laba’s goal erased from time.

“It was the worst feeling in the world,” Ameobi said of the Laba goal. “It literally stops your heart, there’s nothing you can do.”

“To me, I thought once we equalized, I thought there would only be one winner; I thought we had the Whitecaps on the ropes,” said FCE coach Colin Miller, who summed up the night as “heartbreaking.”

“This game just doesn’t care about anybody, especially the head coach.”

Just seconds before the Laba winner, with the game poised to go into extra time, Miller was out of his coaching box trying to rally the home fans to make even more noise.

Whitecaps coach Carl Robinson said the late push by the Caps should quiet the critics who feel his team doesn’t take the Canadian Championship seriously enough.

“We showed how we reacted in the final minute how serious we are.

“It was a very difficult game. I said this the guys after last Wednesday’s game that this is an enormous game for Edmonton. They’ve got something to prove. They fight. They scrap. They run. ”

But, once again, the Eddies got off to a poor start to a game.

Four times this year, the Eddies have given up goals in the first 90 seconds of Cup or NASL matches. On Wednesday night, it took a whole eight minutes before a giveaway in midfield led to a miserable sequence of events which gave the visiting Vancouver Whitecaps a penalty kick — and the opening goal.

After the Eddies corralled the ball in midfield, a poor pass attempt from Ritchie Jones missed his target, Tomas Granitto. The visitors pounced on the chance and Whitecap Cristian Techera streaked into the box, where he was brought down by VanOekel.

Referee Silviu Petrescu waved a yellow at VanOekel, and Pedro Morales rolled his penalty kick inside the post to give the Whitecaps the lead.

And, as has been the case in many games this season, the Eddies settled down as soon as they gave up the early goal. They began to get the ball wide left to Lance Laing who, in the 11th minute, sent a teasing cross into the box for Tomi Ameobi, who had scored in each of his six previous matches. But the sliding Ameobi only made nominal contact with the ball, allowing ‘Caps keeper Paolo Tornaghi to smother the ball.
At halftime, Eddies Coach Colin Miller abandoned the five-man midfield, bringing in forward Daryl Fordyce. And in a game where the Whitecaps played very conservatively save for a few dynamic runs from Techera, there was precious little space for the Eddies to unleash their counterattack.

But Fordyce did get one glorious chance; in the 58th minute he ran onto a great cross from left back Allan Zebie, but blasted his short-range Daryl Fordyce to join Ameobi.

Techera got two good looks for the Whitecaps in the 63rd and 64th minutes, but both efforts slightly missed the target.

Miller and his team, though, will once again wonder “what if?”

“I don’t think we deserved (the result),” said Miller. “I thought we were the far better team in the second half. The Whitecaps were just kicking the ball up the park.”

And, coming so close to MLS opposition two years in a row, what does it say about NASL? Miller said that, over the course of a long season, an MLS team’s depth — like the Whitecaps have — would win out. But in a Cup tie, the depth charts don’t matter.

“On any given day, an NASL club can beat an MLS side. The gap is closing.”