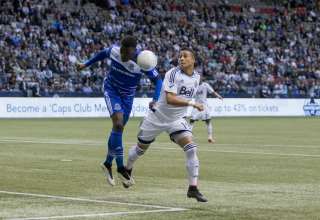 Last year, in the second leg of the Amway Canadian Championship semifinal, FC Edmonton had the Montreal Impact on the ropes. The aggregate score was 4-4, but the Eddies held the advantage on away goals.

A 96th-minute penalty allowed Montreal to take that tie; a year later, the Eddies have learned lessons from that.

So says striker Tomi Ameobi, who has scored in each of his last six competitive matches — Cup games and NASL. He and his Eddies teammates will host Vancouver in the second leg of their semifinal Wednesday at Clarke Field.

“That was the lesson we learned from the last Montreal game, that you need to go on and win the game, that you always have to take the game to the opponent,” said Ameobi over the phone. (Disclosure: I was sick today and, as a professional courtesy, stayed away from training. Don’t want to pass a bug to players on either team.)

Once the Eddies got the goal to tie the aggregate score at 4-4, they defended for the last portion of the game, repelling attack after attack before Patrice Bernier buried the penalty kick. This year, the Eddies have the advantage by getting a 1-1 first-leg result at BC Place. But Ameobi says that the Eddies can’t try to nurse the score.

“We know that Vancouver will bring a strong team, and they will come at us right from the beginning. But, with players like Laingy (Lance Laing), Sainey (Nyassi) and Ritchie Jones, we are looking to attack. We are dangerous on the counterattack. Our attitude will be that we have to go out and win the game.”

Remember that the Whitecaps have been better on the road than at home this year, and that FC Edmonton holds the dubious distinction of allowing the most goals in NASL this season, 15 in just six games. But the Eddies are tied for the lead as the NASL’s top offence, with 11 goals. Add to that seven goals that the Eddies have scored in three Cup contests this season.

So, it would take an awfully brave gambler to lay money down on a 0-0 result Wednesday.

Ameobi’s run is a big part of the Edmonton offensive explosion.

“No, in my career I have never been on a run of form like this,” said Ameobi. “But the credit can’t just go to myself, it has to go to my teammates. Players like Laingy, Sainey, Jones and Daryl Fordyce.”

But Ameobi, like Jones and defender Kareem Moses, didn’t see the field in Sunday’s 3-2 loss to San Antonio. Laing and Nyassi only came on as second half-subs and got about a half-hour each. While Ameobi understood coach Colin Miller’s reasons behind resting select players on the team, it made for a very frustrating afternoon.

“Definitely, it was hard to watch. A couple of players were rested, but it’s frustrating because you feel like you are able to play. But, at the same time, you understand that you’ve played a lot of games, and there are a lot of players, based on how they’ve performed in training, who deserved a run-out. But it was hard, considering we came back twice and then looked like we were going to go on and win the game.”

As for Wednesday, Miller said it’s important that Edmontonians treat this as a Cup final and fill the stadium.

“Definitely, it doesn’t matter who is in a Vancouver shirt, they are one of the best teams in MLS. I think they are the fastest team in MLS. But, we can’t go out and treat the Whitecaps like they’re Germany. We will give them the same respect we would give to any visiting team. I have looked at them and I see weaknesses there, just as I am sure (Whitecaps coach) Carl Robinson has looked at us and seen weaknesses in our game. But we can’t sit back.”