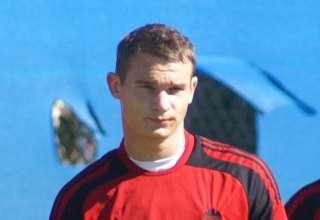 Alberta has made soccer news for the wrong reasons in 2010 as an ugly power struggle has crippled the Alberta Soccer Association.

The province continues to be badly under-represented on most national teams, which are dominated by players from British Columbia and Ontario.

The rise of BMO Field and Stade Saputo has made Commonwealth Stadium, once the official home of Canada’s national soccer team, a place reserved to host Canadian games only if they are World Cup qualifiers in winter months against Mexico, in hopes of freezing out the regional power. Gains made in boosting the game in Ontario and Quebec have taken a toll on Alberta.

So, that’s why the selection of Ethan Gage as the country’s male U-20 player of the year is a big deal.

Why? Gage hails from Cochrane, Alta. It’s close to Calgary, 18 km down the highway; but it’s very much a prairie town. He doesn’t come from a multicultural urban centre, which tends to produce almost all of Canada’s soccer talent. Gage comes from the kind of prairie town that produces hockey stars and curling skips — the kind of Conservative-voting, Tim Hortons-drinking place that has shunned soccer for years and years.

As much as soccer has succeeded in Canada’s urban centres, it has failed in the small towns and hamlets. And that needs to change. We need to cultivate soccer talent not only in the Greater Toronto Area and Vancouver, but in places like Grande Prairie, Alta. or Foam Lake, Sask.

Gage has been a member of the U-17 and U-20 programs, and was part of the U-23 selection camp that coach Tony Fonseca ran in Florida last month. He promises to be a Vancouver Whitecaps star of the future.

Not since Geoff Aunger, who was the first Canadian to ever be part of an MLS Cup winner, has such a promising Alberta-born talent had the chance to move on to first-division soccer in Edmonton. Aunger, who was an integral part of the Canadian midfield during the qualifying run for France 98, and took penalties, hails from Red Deer, Alta.

Hopefully, FC Edmonton will soon have an academy in place to cultivate local talent. Team general manager Mel Kowalchuk said while there is no academy in place at the moment, the NASL club definitely plans to have one established in the near future.

With FC Edmonton playing its first competitive games in 2011, and Alberta talents like outside back Eddy Sidra and forward Randy Edwini-Bonsu looking to move towards places on the senior national team, Alberta will finally become an integral part of the Canadian soccer scene.

As well, the CSA announced Tuesday that Jonelle Filigno had been named the U-20 female player of the year.

This was about as surprising as Christine Sinclair winning the senior women’s player of the year award year after year.

Filigno made the move up to Canada’s senior team, and made a major impact during the Gold Cup, which our national side won — and guaranteed its place in the World Cup.

Filigno scored and helped set up another (trying to avoid using the word “assist” in soccer… ewww) in a 4-0 win over Costa Rica and scored twice in an 8-0 drubbing of Guyana.

She’s sure to be part of the World Cup squad that goes to Germany.