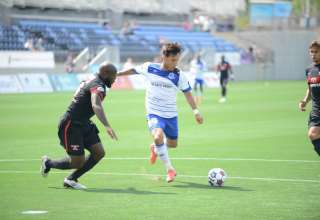 Jalali had his preliminary inquiry on cocaine trafficking charges Thursday in Edmonton provincial court. A publication ban was placed on the evidence presented at Thursday’s court proceedings. The Sept. 8 court date was set after the hearing was cut short before all the witnesses could testify; the Crown and defence agreed to move on to the arraignment.

Jalali and his older brother, Saidkheyam, were arrested on Aug. 3, 2016 after their vehicles were pulled over by police. Sadi was charged with cocaine trafficking, for allegedly having $5,280 and 16 small baggies of cocaine in the car. His brother was allegedly in possession of $3,950 and a handgun.

The arrests came after FCE had released Sadi Jalali.

Jalali played in the U-17 World Cup for Canada, scoring in a game against England. He was also part of the Vancouver Whitecaps Residency before returning home to Edmonton. Jalali made 25 appearances for the Eddies over three seasons, scoring twice and adding three assists.