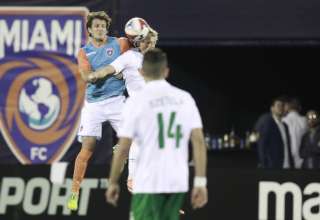 Miami FC is unlike any team we’ve seen in NASL 2.0. With a big budget and the inspiration from coach Alessandro Nesta, the team won the 2017 spring season title by 10 points over the San Francisco Deltas. The team’s goal differential, over just 16 games, was a whopping +22. The team has knocked MLS sides Orlando City and Atlanta United out of the U.S. Open Cup. Sure, we’ve talked about the lavish, over-the-top ways of the New York Cosmos in the past, but Miami FC has taken things to a new level.

And, in the midst of it all is Canadian Mason Trafford, who has been a regular starter with Miami FC since the team acquired him from the Ottawa Fury after the 2015 season.

Trafford is a linchpin for the second-year franchise.

“It is fun,” Trafford said of Miami FC’s season so far. “Consider where we came from last year; last year, we had a good team, but we didn’t have the success we wanted. Now, this year, with our experience, they’ve added one or two pieces and everything has clicked.”

He said that from training to sports science to their travel arrangements, Miami FC is a step above.

“This club is not half-assing anything,” he said. “As a club, you set up the players to deliver what the fans want to watch.”

Trafford is visiting family in Vancouver during the break between the spring and fall NASL seasons. But while he enjoys his time back in Canada, he hasn’t had the chance to play for this country’s national side since 2013, when he got a few minutes in for a friendly against Denmark. “I definitely feel a bit passed over,” said Trafford. “It’s something that used to get under my skin,  but it doesn’t bother me now. There really hasn’t been any contact with the national team. And, from what I know, there hasn’t been any contact between the national team and Miami FC. And, well, our coach is Alessandro Nesta, and he was one of the best ever to play the position; I’d think there would at least be an introductory phone call made.”

But Trafford understands that there may have been one game that cemented a negative view of himself with the people in the Canadian soccer hierarchy. When he played for Ottawa two seasons ago, the Fury faced FC Edmonton in the opening round of the Voyageurs Cup. Trafford knew the Canadian brass were watching. He pushed to be in the lineup even though he was probably too sick to play. He had what he called one of his worst-ever games, and wonders if if a low point in his pro career came exactly at the wrong time, in front of the wrong people.

Being a defender and having “one of the best ever to play the position” as your coach — it’s an interesting position for Trafford to be in.

“He’s incredibly intense and passionate,” Trafford said of Nesta. “He is definitely one of the most intense coaches I’ve ever played for. You have to meet the standards he sets — even at training.”

Trafford said the team is very deep, and that there is intense competition for places, week in and week out. But he also knows the club has confidence in him — when the team can into existence, the staff identified Trafford as one of the players the new Miami FC had to have.

“I was still with Ottawa. I had every intention of staying. But then this possibility of going to Miami just came up, and it was a no-brainer. I had to go and give it a shot.”

Now the question, can Miami FC do the double? An NASL championship and a U.S. Open Cup?  Miami has a big quarter-final match coming up against the USL’s FC Cincinnati. It could be called a battle of Cinderellas, if only it didn’t come off as completely weird to call Miami FC a Cinderella.

“The U.S. Open Cup is something that the owner, the coaches and the players take very seriously,” said Trafford. “The goal of Miami FC is to win. This club wants to make a statement in North American soccer. We’ve played MLS sides and we have showed them what this team is all about. We are bringing something new to the table.”