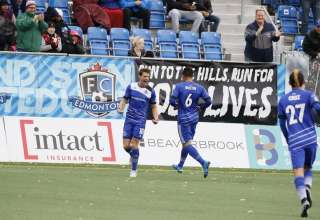 Daryl Fordyce is the leading scorer in FC Edmonton history. The former Northern Irish youth international was well on the way to getting his Canadian citizenship, and had said on the record that he was willing try and do the paperwork to appeal FIFA for a switch to the Canadian national team after his passport arrived.

But, Fordyce has closed the chapter on his FC Edmonton career. On Monday, his move to USL side FC Cincinnati was made official.

FCE coach Colin Miller admits that it was difficult to see Fordyce leave. They had a heart-to-heart and Miller said he wishes Fordyce well.

But, in the end, FCE couldn’t compete with the dollars being offered south of the border.

“It is very disappointing,” said Miller. “The club made him what I thought was a very good offer. But a club like ours can’t compete with the bigger soccer markets in the United States, and the Canadian dollar kills us.”

Miller said he’s known for a while that the move was on, and he’s already been looking for replacements. He also needs to replace Shamit Shome, drafted by the Montreal Impact, and keeper Matt VanOekel, who signed with Real Salt Lake. But Miller said two new players have already been signed and he continues to look for more options.

“Daryl has had a lot of success in the NASL in recent years and we feel very confident that he will come into our league and be a successful attacking option for our team,” said FC Cincinnati coach John Harkes in a release issued by the club. “Daryl is the consummate professional and he will help guide some of our younger players as we continue to grow our club.”

“We would like to thank Daryl for his contributions to the our club over the past four years,” FC Edmonton co-owner Tom Fath said in a statement issued by the club. “Daryl has been an important part of our team for a number of seasons and has been an excellent ambassador for our team on and off the pitch.”