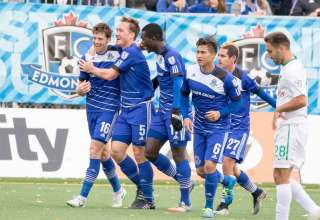 Daryl Fordyce, left, is congratulated by his teammates.

It drives Daryl Fordyce nuts. Being part of FC Edmonton for the last four years, the striker has seen just what Canadian prospects are up against. He understands that it’s hard for a Canadian prospect to get the paperwork to play in Europe, and that the North American leagues are skewed to favour the young Americans over the prospects from this country.

That’s why, when his playing career is over, he fully intends to become a soccer coach, working with youth players in Edmonton. He’s even thinking about opening his own academy. As FC Edmonton’s all-time leading scorer and former Northern Irish youth international, he’ll certainly have the reputation to attract young talent.

But that’s five years from now. For the present time, he’ll be moving to Cincinnati; on Monday, FC Cincinnati announced that the club had secured Fordyce’s services. Fordyce and his wife, Tina, will be making the move to the United States once the visa paperwork is done.

Ironically, this week, Fordyce received an e-mail that he’s been approved for his Canadian permanent residency. He says “everything is 95 per cent done” for him to have his Canadian citizenship. And he says no way is he giving that up — he and his wife see themselves as Canadians and plan to return to Edmonton.

“The decision I made to go to Cincinnati, it was for the short-term, not the long-term,” says Fordyce. “It was the toughest decision I’ve had to make in my life.

“My wife is going through a career change and is going back to studying. We want to start a family. With my wife not working, we needed help with our accommodation. And Cincinnati made a good offer, and will pay for our accommodation.”

And that’s a big deal when one member of the couple is back in school. But it wasn’t an easy decision to make.

“We like it here. We love being close to the mountains. Look, we could have gone home to Belfast during the three or four months I have off, but we stayed here during the winter break, because we feel at home, here. We made the decision to stay and wait out to see what was going to happen to the league (NASL, as the owners sorted out the restructuring of the league).”

Fordyce said that because the USL season ends earlier than the NASL season, he expects to come back to Edmonton and cheer on the Eddies as they hit the home stretch of the season (note to Supporters Group: Get him a copy of the all the requisite songs he’s going to need to learn).

“If was a life changing decision,coming to Edmonton,” he says. “Playing in Edmonton, I’ve left everything on that pitch. I was one of the first guys on the field at training and on game days, and one of the last to leave. I always gave 100 per cent. I gave it everything I have and I got so much back. That’s why I want to come back to coach. I want to thank Colin (head coach Colin Miller) and Jeff  (assistant coach Jeff Paulus) and the the backroom staff, and of course the fans for all the support over the years.”

He says the the kids he’s seen play in Edmonton rival players the same age in Europe. He hopes that former FCE teammate Shamit Shome, drafted by the Montreal Impact, can hopefully make a breakthrough. He’s hopes Edmonton teen Alphonso Davies can make a breakthrough with the Whitecaps. And he wants the talent pipeline to increase its capacity.

“I see myself giving back to the game.”