January 29, 2023
9 New Articles
Home MLS Montreal Impact Shome says his SuperDraft slide will only serve as motivation to make an impression with the Impact 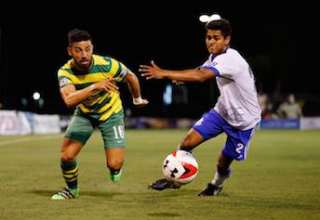 Shamit Shome says that seeing his stock slide in Friday’s MLS SuperDraft will only serve to motivate him when he arrives to the Montreal Impact’s preseason camp.

Shome, who was one of two players identified by Canada Soccer for this country’s new Generation Adidas program, slid to late in the second round of Friday’s draft, where he the Impact selected him 41st overall. That wasn’t the heady territory expected of a player who was the subject of an unprecedented move by MLS — purchasing a teenage player from an NASL club. And, as a GA player, his salary wouldn’t impact the salary cap of the team that drafted him.

But the former FC Edmonton phenom, who played 26 league games with the Eddies in 2016 is putting the positives ahead of the negatives.

“It was, obviously, disappointing on how the draft worked out but, luckily, I had my dad with me,” Shome said. “And we talked about how it doesn’t matter where you’re picked, it’s about making an impression once you get to camp. So, really, this will be motivation for me.”

Shome is currently with the Canadian men’s U-20 team, prepping for games on Jan. 19 and 21 in Panama. After the camp, he’ll get his medical with the Impact, then return home, then head for another U-20 camp, which means he won’t get to Montreal’s preseason camp when it begins. But, even with a shorter window to impress the Impact’s brass, he wants to make the most of his opportunity.

“I’d have been happy with whoever had picked me. Going to the U.S., another country, that would have been an adventure. But Montreal is great. I have a couple of teammates in the U-20s who are with the first team. It’s still in Canada and and my mom and dad are happy because it’s a direct flight. And Montreal has so much experience in the midfield, I can’t wait to start learning from them.”

Shome’s entry into the draft was unusual. Generally, MLS scouts and general managers have a good idea of who will enter the draft well in advance of the selection process. But Shome’s signing with MLS — and entry into the GA program — was announced just a week before camp, and it came in a whirlwind. The signing process came over the course of a couple of days, so there really weren’t even rumours that this was going to happen till the day before the signing was made. So, Shome wasn’t on any team’s pre-draft ranking lists.

And then there’s the combine. Every year, MLS puts what it identifies as the top prospects into a series of games. Issue is that these players have never played with each other before. Shome said that his combine squad (the aptly named Team Chaos) had just one 30-minute training session — which really was nothing more than a kickabout — before being put into a game situation. To play with absolute strangers, to play what basically amounts to a pick-up game for  all the marbles, that’s tough on all the prospects.

“It was a good experience to go through it all, but it wasn’t amazing or anything,” said Shome.

There are many possibilities ahead for Shome; because his salary doesn’t count against the Impact’s cap, Montreal has the luxury of allowing him to develop without putting a dent in its roster. He could also be sent to the Impact’s affiliate — the USL’s Ottawa Fury.

But, being drafted by a Canadian team means that, down the road, Shome could have to face FC Edmonton in an Amway Canadian Championship match, whether it be as a member of the Fury or the Impact. The possibility is there. And, as an Edmonton kid brought up through the FC Edmonton system, Shome can’t even wrap his head around what that would be like.