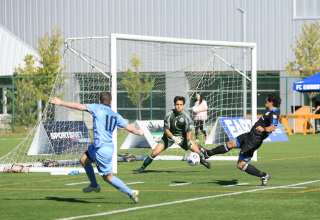 FC Edmonton was so badly outplayed by Minnesota United FC at Clarke Stadium Sunday, that Eddies’ forward Daryl Fordyce thought it was important to say his team was sorry.

“I want to apologize for the performance today,” said Fordyce, who scored the Eddies’ lone goal, a 93rd-minute consolation, in a 2-1 loss to Minnesota United FC.

Fordyce’s goal, off a cross from Antonio Rago, was one of only three serious goal threats from the Eddies in front of 3,143 fans at Clarke. It took until the 58th minute for the Eddies to threaten Minnesota in a meaningful way — a Corey Hertzog effort that flashed wide of goal after he was allowed to turn in the penalty area. A shot from distance off the foot of Rago was the Eddies’ other chance of note, and that came in the 66th minute. Minnesota keeper Matt Van Oekel was able to leap and grab the ball.

But three chances aren’t enough for a team that desperately needed three points at home. The Eddies are now seven points behind the first-place New York Cosmos.

Calum Mallace, on loan from the Montreal Impact, gave Minnesota the lead after his volley attempt glanced off the leg of Eddies’ midfielder Chris Nurse and found the corner of the goal. Centre back David Proctor headed the ball out of danger, but it fell to Mallace, who got the power on the shot and a bit of help from the deflection.

But Minnesota had its chances before Mallace broke the ice. It was Mallace who launched a free kick just wide of the target in the 17th minute, and keeper Lance Parker was forced to make a diving stop on a 33rd-minute effort from Mike Ambersley.

Meanwhile, FCE coach Colin Miller said he was frustrated watching his forwards giving the ball away and unable to hold it up in dangerous areas. During the halftime TV interview, he said he expected right winger Gagan Dosanjh to do more in possession with the ball. Five minutes after the break, Miller took Dosanjh off in favour of Wes Knight, who got his first action in since breaking his foot in Minnesota last April.

Right after the second-half kickoff, Minnesota should have been two goals up. Parker came out to play a cross, didn’t get to it, and the ball fell to reigning league MVP Pablo Campos. All he had to do was get the ball sit down and hit the ball into an open goal from five yards out. Maybe it was a slide from Proctor that threw Campos off, but he totally shanked the chance, allowing Parker to get off the hook.

But Parker, unfortunately for him and his FCE teammates, gave back. In the 62nd minute, forward Simone Bracalello poked a slow roller towards the Eddies goal. Parker came out to smother the ball and, as he went to ground, the ball slipped through his arms, squirted through his legs and rolled oh so slowly across the goal line. On the Clarke turf, there was nowhere for Parker to run away and hide.

“The goal definitely took the heart out of us,” admitted Miller.

“You’ve just got to move on,” said Fordyce of the Parker mistake. “You see mistakes happen at every level of football. It happens to keepers, it happens to strikers. Last week, Manchester United, you see both Wayne Rooney and Robin Van Persie miss chances. They’re making hundreds of thousands of pounds a week and they miss chances from three feet.”

But, even with the game at 2-0 and Edmonton with very little to lose, the Eddies struggled to attack crosses, and it wasn’t until right before the referee blew whistle for time that FCE converted a chance. The cruel irony is that Fordyce’s late consolation made Parker’s mistake loom even larger — even though, with the Cosmos and Rowdies making a surge up the NASL standings, the Eddies needed three points at home, not a draw.

The Eddies had targeted six points out of the completed two-game mini homestand against Fort Lauderdale and Minnesota. They got one. And, now, the talk of Edmonton’s now done-like-dinner six-game undefeated streak (a win and then five 1-1 draws in a row) will change to talk of FCE’s now six-game winless streak.

“It wasn’t like we were battered out there,” said Miller. “On the day, we weren’t on the same level as Minnesota.”