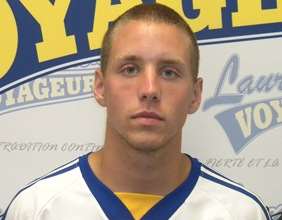 Ian Wolfe
OK, there is no denying that getting to No. 1 on the CIS men’s soccer rankings is a massive jinx. Three weeks ago, the University of British Columbia didn’t even last a week at No. 1, losing its home opener, the school’s first loss in 27 matches. York went to No. 1 two weeks ago, and then went out and had its regular-season run of 25 unbeaten matches snapped. So, last week, Carleton went to No. 1. And guess what happened. Right. On Saturday, the Ravens lost to Laurentian, 2-1. On Sunday, the Ravens could only manage a 0-0 draw with the Nipissing Lakers. With just one point out of a possible six, the chances are slim to none that Carleton will hold on to the No. 1 spot. That means, over the last three weeks, three different schools have been at No. 1, and none have been able to hold onto the ranking. Ian Wolfe scored a goal in each half for Laurentian in its 2-1 triumph over Carleton. Laurentian was only able to launch four shots at goal through the match, but it made the most out of its scoring opportunities. OTTAWA ROLLS On the women’s side, holding onto the No. 1 ranking wasn’t a problem for the Ottawa Gee Gees. The University of Ottawa women rolled to a 7-1 win over Nipissing on Saturday, then got a 90th-minute goal from Corina Jarrett that was the difference in a 1-0 triumph over Laurentian on Sunday. In the rout over Nipissing, Pilar Khoury scored twice. She now leads the CIS women’s scoring table, with eight goals. Ottawa is now 6-0-2 on the season (because this is Canada, not Europe, we go with W-L-T), with a goal difference of +27. WHAT’S WRONG WITH TWU? Trinity Western is the defending women’s national champion. It began the 2013 season at No. 1. Yet, after five games this Canada West season, the Spartans have just one win. They went on a road trip through Saskatchewan this past weekend, and could manage just two draws. The first was a decent result; a 1-1 road draw against an undefeated University of Saskatchewan outfit. Natalie Boyd opened the scoring for TWU, but a free-kick effort from Erica Parenteau gave the home side the equalizing goal early in the second half. On Sunday, the Spartans were only able to manage a 0-0 result with the Regina Cougars. Regina keeper Kacey McFee made six stops in the match. The TWU record is now 1-1-3. Last week, the Spartans, based on its strong preseason ranking, still held on to the No. 3 spot nationally. Can’t see the Spartans holding onto that. Draws aren’t good enough for a program that many expected to see go right back to the national title game this year.
Load More Related Articles
Load More By Steven Sandor
Load More In Uncategorized
Comments are closed.