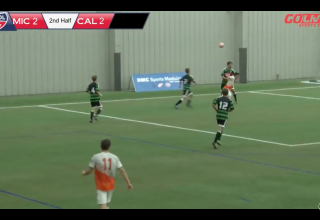 The PDL final was decided not by a stunning passing sequence, or a cracker of a goal. It was not even left to the lottery of spot kicks after extra time.

No, the final was decided in the worst way a game of such magnitude can be decided; with a controversial penalty. Trust me, if you lose, you’d rather lose because the opponents beat you with a wonderful goal — or, if it has to be on a penalty decision, that it’s stone-cold clear.

But, late in the second half, Calgary Foothills was tied 2-2 with the Michigan Bucks. Then, the game changed for the final time — as Calgary defender Jonathan Wheeldon was called for hauling down Michigan forward Adam Najem. The referee pointed to the spot.

Now, in the past, whether it’s in my writing or on FC Edmonton broadcasts, I’ve been vocal about how referees have to do more to ensure that defenders don’t get their hands all over opposing forwards. Clutching and grabbing is an epidemic in soccer at the moment.

I’m just not sure if that call on Wheeldon fitted the bill. Did he impede his opponent; did he push? And there’s little doubt that Najem sold the referee with a pretty ambitious fall to the turf.

Michigan converted the ensuing penalty, and took the PDL title with a 3-2 win. It’s often said — and most of the time, it’s true — that calls even out. But the cases where that doesn’t hold true are when a controversial calls costs teams championships or eliminates teams from competitions.

What do you think of the call? Click on the featured video. Go to the 2:07:30 mark. Tough justice, or did Calgary get hosed?

Whatever way you lean, it’s not a great way to end what should have been a great final.