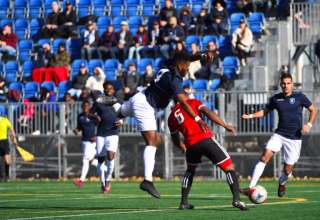 When the players of FC Edmonton and Cavalry FC walked onto the Clarke Stadium pitch for the second autumn instalment of their Al Classico series, Gerry and the Pacemakers’ famous version of the Broadway classic “You’ll Never Walk Alone” was played over the loudspeakers.

As FCE coach Jeff Paulus is a Liverpool supporter, the song carried a double meaning. Of course, it was a playful barb directed at his rival, Cavalry coach and Everton supporter Tommy Wheeldon. But, Paulus wants the song to become a regular fixture at games in Edmonton.

“We’ve gone dark, we’ve come back, it’s ideal,” Paulus said of his song choice. “It’s my plan to make it a tradition.”

But, in the end, it was the Everton supporter coaching the team wearing red getting one over on the Liverpool supporter coaching the team wearing blue. The teams finished 90 minutes of play level at 1-1, but the Calgary-based side won the exhibition match/trialist evaluation on penalties, 3-2. Dominick Zator beat FCE keeper Will Sykes with the deciding kick, right after Eddies trialist Reafe Anderson had his attempt stopped by Cavalry keeper Marco Carducci.

Anderson scored with his first attempt on Carducci, but referee Juan Marquez demanded a retake, as the strong wind nudged the ball just before Anderson’s left foot made contact. With the second try, Anderson — who played with Masters Futbol of League1 Ontario – went the same way, to Carducci’s left. But, the keeper guessed correctly and got his hand to the shot.

“Apparently, the ball moved an inch or something,” Paulus said. “At the end of the day, he’s got to make the second one. He put the ball in the same position, he didn’t hit it as well, he’s got to take responsibility for it.”

Carducci was called into action just three minutes in, as he picked the ball off the foot of FCE’s Marcus Velado-Tsegaye, after the Eddies forward was able to split the Cavalry back line.

But, in the 12th minute, Velado-Tsegaye got his revenge, dancing past three red-jerseyed players, entertaining the crowd with a series of stepovers, then firing a shot that beat Carducci and nestled inside of the far post.

With the wind at its back in the second half, Cavalry pushed for the equalizer, and got it in the 64th as Sergio Camargo silenced the crowd. FCE did not do an attendance count for the game, but there were likely less than 1,000 on hand for the match.

But, as Cavalry and FCE both prepare for the April launch of the Canadian Premier League, Wheeldon introduced some wrinkles. Forward Franck Tayou, recently with Fresno FC of the USL, started the game. Willie Spurr, Nick Moon and Jon Stadler, all from PDL side Lane United, came into the game as subs. Spurr scored in the shootout while Moon had his attempt saved by Sykes.

All four of those players are Americans.

As for the three Lane United players, Wheeldon saw them play against Calgary Foothills and were impressed by how well they did.

“They were hungry, and I wanted to throw them into the chaos. It was a chaotic game. The best trial they can have is to put them in a situation where there’s pressure on the ball, there’s a rivalry at stake, they’re not familiar with the turf, the wind. And, so, I’ve got some good answers today on the level of players I’m looking at. That’s my base.

“We are dealing with a lot of interest right now. My first and foremost is that I’m looking at Canadians. They were the first few foreigners that I’ve looked at just because this is a real rare opportunity where we’ve got to extend our training period.”

Wheeldon said the Cavalry would have a intrasquad match to give players a further look.

“It’s great for Tommy,” Paulus said. “I think one of the difference makers in this league will be those gems you can find anywhere, whether it’s the United States, Central America, South America. If you can find a player no one else knows about and get him in at a good dollar, those will be the guys who can make an impact in this league, because there will be a lot of parity in this league, initially, when we deal with Canadian players and how we’re going through the player-signing process.”