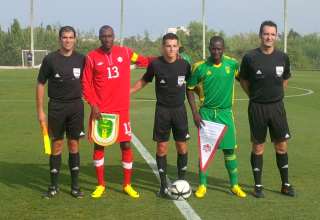 Those operating under the idea that Benito Floro was going to come in and immediately turn the Canadian men’s program around were dealt a harsh blow on Sunday when a very young Canadian team mustered a scoreless draw against Mauritania.

In his first game in charge, Floro went largely with youth in a game in Oliva, Spain, whose only highlights were hard tackles rather than quality scoring opportunities.

Eighteen players dressed for the game with those not involved (including many veterans) watching from the single concrete stand that lined one side of the field.

“It was OK because for us this was a training game,” said Floro. “The only difference between this and training is that the opponent is a national team with a good defensive structure. They made it difficult to develop our attack. But it’s a good test for us.”

Midfielder Atiba Hutchinson was one of only a handful of veteran faces to start. He, along with attacker Dwayne De Rosario, defender Dejan Jakovic and keeper Lars Hirschfeld, were largely surrounded by youth as they took on a team ranked 151st according to FIFA but was certainly an athletic bunch.

There were undoubtedly a few nerves early as Canada had trouble coping with the Mauritanian pressure that largely kept Canada on the back foot.

But slowly Canada found their legs and in the 21st minute, Jonathan Osorio had Canada’s best (and pretty much only) quality scoring chance of the game.

Osorio linked up with Ashtone Morgan. Morgan had eluded a tackle and the referee played the advantage. He then knocked the ball out to Osorio who cut in on his right foot and hit a curling, goal-bound shot that had to be tipped over.

“Usually the first 10 minutes of the game are physical, high-paced but as the time went on we settled in, possessed the ball and looked for our movements,” said Morgan who did well on the back line. “Unfortunately we didn’t get the win, but we’re happy with the tie and we’re moving on from there and we’re positive.”

More often than any offensive thrust, the game was defined by hard tackling. While Maurtiania had no problem leaving a leg in or coming in late, their reactions to any perceived slights either legitimate or imaginary were reminiscent of what Canada faces in Central America.

“Maybe sometimes you can say it’s like some of the Central American teams. Maybe not as rough in the tackling as they had against us out there,” said Hutchinson, who was captain on this day. “Overall I don’t think we need to focus on that too much. Maybe at times we let it get to us instead of concentrating on the game. Like I said, the next game is important that we need to get a result against them.”

After the game Floro said he wouldn’t change much as the rematch comes two days hence. The only obvious change is that there will be many players coming in and many going out with most of the big squad in camp hoping to see at least some action.

Canada may have been frustrated by the overzealousness of their opponents, but it should present a valuable lesson. As the game went on, Mauritania looked similar to a Central American team that was killing the clock as best it could.

“I know we worked very hard through the days and so the players were a little tired but it’s necessary to play a lot between us and to test with the friendly matches,” said Floro. “But I understand it’s very difficult to get a result against a very good national team like Mauritania who press very excellently.”

There was a bit of colour in the stands as a delegation from the Mauritanian embassy was in attendance for the occasion. But other than that, a handful of locals, the Canadians who didn’t dress and two Canadians in Spain who drove to watch the game, there wasn’t much atmosphere for the game.