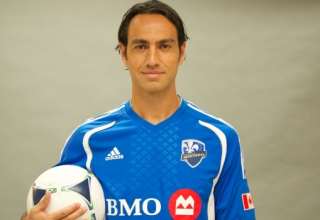 The Montreal Impact’s playoff hopes slimmed considerably after the host Chicago Fire exposed what is an experienced but painfully slow defensive four.

The Impact pressed the host Fire early, and took a 1-0 lead thanks to some guile from striker Marco Di Vaio, but the Impact’s experience in the defence was outweighed by its lack of movement, as it surrendered three unanswered goals. The Fire won 3-1 and, after Saturday’s action came to a close, Montreal has just four games left on the schedule, and trails D.C. United by five points for the final playoff spot in the MLS Eastern Conference. But, to make matters worse D.C. has six games left compared to the Impact’s four.

The Impact began the match strongly; and just a few minutes in, defender Hassoun Camara had bundled the ball into the goal after a corner, but it was disallowed because he’d collided with Fire keeper Sean Johnson. Central defender Nelson Rivas rose to meet the corner, and Camara charged in to get the second touch before Johnson could get there. And the fact two defenders were so active on a set piece in opposition territory so early in the match showed just how badly Impact coach Jesse Marsch wanted his team to take the initiative.

But, soon after, the Impact had its deserved lead. Marco Di Vaio turned veteran Fire defender Arne Friedrich inside out, then finished neatly. In fact, the former German national teamer had such a difficult first half, that he was subbed off before the halftime whistle.

As tough as Friedrich had it in the early going, the Montreal foursome of Alessandro Nesta and Rivas in the middle, and Camara and Matteo Ferrari in the fullback slots, had it far, far worse. Rivas lasted 65 minutes; Nesta was subbed off in the 81st.

Chicago got the equalizer before halftime, after a prolonged spell of possession just outside the Montreal penalty area. Twice the ball went out wide right to the Fire’s Jalil Anibaba; the first time he played it back to the top of the box, the second time he was given loads of time to fire in a cross for Sherjill MacDonald to head home. For the Impact, staying compact in the middle of the pitch is nice, but someone, whether it’s the left back or a midfielder or even a forward tracking back, has to challenge Anibaba to take a touch or two, rather than settle for the cross.

After Johnson made a smart save on the Impact’s Davy Arnaud early in the second half, the Fire got its lead. Alvaro Fernandez settled the ball at the top of the area, was able to turn and thread a ball through to Alex, who roofed his shot into the top corner.

Again, the Impact defence was caught flat, offering Fernandez the time and space to hold up the ball and turn. With the kind of experience the team has on the backline, with the likes of Nesta and Ferrari who have played years and years in Serie A, you can’t think that it’s indecision; you have to come to the conclusion the players just don’t have the speed to get there.

The insurance goal came late, after Chris Rolfe made a great run down the left and slid the ball to the top of the box, where Fernandez was left unmarked. He turned on the ball and finished smartly. Again, no Impact defender moved up to press Fernandez. And Rolfe was given free reign down the left side of the Impact defence.

MLS is a league that requires athleticism and physicality; guile is nice, but in order to succeed, you need a back line that mixes experienced players with horses who can stand up to game after game and still be mobile. The Impact has the experience; but it needs to find the mobility.