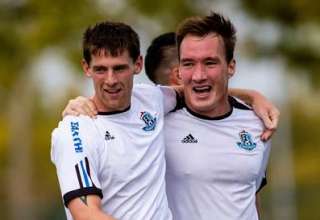 Daryl Fordyce has been named the NASL Player of the Week.

Fordyce’s second goal was smashed just underneath the crossbar at Clarke Stadium, after right back Edson Edward made a terrific run up the wing and pushed a pass to the top of the box. Fordyce made a clever run to find a dead spot in the box, where there were no Carolina defenders to be found.

Fordyce is the fourth Eddie to win a Player of the Week/Month award this season.

At the end of August, Eddies’ midfielder Chris Nurse was named the player of the month after he went on a three-game scoring streak.

Before Fordyce, the last FCE player of the week? That came in the middle of May, when Michael Cox, who will miss the rest of the season with injury, was named for a two-goal performance. Edmonton’s other Player of the Week winner came at the end of April, when Shaun Saiko got the award for scoring the match-winning penalty against San Antonio.Last week, Saiko was demoted to the youth team for the remainder of the FCE season, and coach Colin Miller confirmed the team’s all-time leading scorer would be leaving the club at the end of the season.