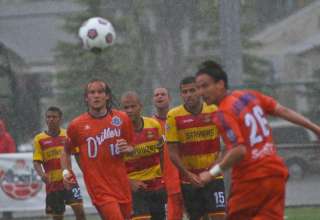 Could the red card that Antonio Rago received in Sunday’s 1-0 win over Fort Lauderdale been exactly what FC Edmonton needed to right its 2012 NASL campaign?

Yes, it’s an odd statement, asserting that having a player sent off thanks to a controversial call could be a good thing. But, down to 10 men and already wrestling with a backline decimated by injuries, FCE gave the fans who endured a series of downpours their best, most focused effort of the season. In an NASL campaign which has seen FCE flirt with the bottom of the table, an against-all-odds win might be the thing the team needed to help it bond — the kind of win that could turn around a season.

It’s too early to tell if that will be the case — but you can sense at FCE’s Wednesday training session the players certainly feel that the 1-0 decision was a turning point. A penalty was saved by Lance Parker. Michael Cox came back from an injury spell and excelled in the lone striker role after the lineup was reshuffled due to the sending off. Chris Kooy moved from the midfield to play centre half in an injury riddled back line. After Rago saw red, Matt Lam was moved to right back.

It wasn’t the first time Lam played right back. He recalled doing it as a teen, when he was with Ajax’s youth system in the Netherlands.

“I played there a little bit, maybe one game, in my time there. But they like you to play everywhere in training, so you can learn a little about every position.”

When Rago was sent off, there was some discussion on whether holding midfielder Kenny Caceros or Lam would drop back to right back spot, but word quickly came from the bench that it would be the right winger who would move back.

“As a team, we all had to be on the same page,” said Lam. “We had the weather. We went down a man. We needed a strong team effort, and we were out there playing for each other…

“You don’t like to play because of revenge, but they beat us 1-0 earlier when they had a man sent off. So it was a bit of revenge on our part to do it to them.”

No one exemplified that play-for-each-other mentality more than Cox, who missed the better part of the last month with a nagging ankle problem. He came in at halftime, and did yeoman’s work disrupting the Strikers’ backline, and was rewarded with a goal. And, with Edmonton nursing the lead, Cox tracked back and made sure to do his defensive duties.

“I scored my first goal in Atlanta right before I got the ankle injury so I had coinfidence that I could come out and do it again,” said Cox.

And, like Lam, he thinks this could be the start of something better.

“We train together every day and we are getting better and better with every game. Every time we play together, things get a little better. As the season goes on, we will improve. In that game, everybody gave everything they had, we all played for each other.”