August 18, 2022
9 New Articles
Home Uncategorized Corradi’s decision to stay with the Impact is the right one 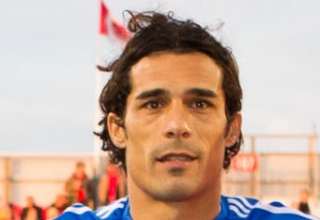 Bernardo Corradi
The Italian strike team of Bernardo Corradi and Marco Di Vaio will remain together in Montreal for at least the duration of the 2012 season. The Montreal Impact announced Thursday that the club and Corradi had come to a “verbal agreement” on terms that would see the veteran Italian forward remain with the club until the end of the MLS season. As of this moment, Corradi is signed to a deal that expires at the end of June, and there was speculation he wasn’t going to extend so he could look for work closer to home and be with his family. “We came to agreement pretty easily,” said Corradi in a release issued by the Impact this morning. “My intention was always to stay here. Joey (team president Joey Saputo), Nick (sporting director Nick De Santis) and Jesse (coach Jesse Marsch) have made me feel like I was a part of this project. For me, to leave now would be to leave unfinished business.” Corradi has scored four times in 10 matches and has become the team’s penalty taker of choice. And, by agreeing to remain in Montreal, he’ll get the chance to develop a stable partnership with newly arrived Designated Player, Di Vaio. Montreal, though, could have benefited from the fact that Italy isn’t quite as rosy a place for a professional footballer as it was even a month ago. While Corradi has been in Canada, the perception of Italian football has considerably worsened. The largest match-fixing investigation that country has ever seen — and it has seen it’s share — have further damaged the reputation of soccer in that country from Serie A to the lower regional leagues. The law of averages would indicate that if Corradi tried to resume his career back home, there’s chances that the team with which he signs could be touched by the scandal in some way. Really, for a thirtysomething player who has enjoyed some success during his time in MLS, staying in North America is a better move than trying to find work in a country whose league gives the world the impression that it’s held together by Band-Aids. According to the MLS Players’ Union’s salary figures, Corradi is scheduled to make US$265,000 in 2012 — what would a thirtysomething make, or even be offered, in an Italian soccer scene that’s been overwhelmed by scandal and a worsening domestic economy? And, as we see the European economic crises worsen, as we see more teams run into major financial trouble (such as Rangers), as we see police investigate more allegations of corruption, MLS transforms into a safe harbour for players. Yes, there is a salary cap, but you know the paycheques arrive on time. And, as more and more European teams run into legal or financial issues, that should eventually put downward pressure on player salaries, as Europe will become more and more of a buyer’s market. That, again, will make MLS more attractive. Corradi’s decision is the right one, and reflects the growing new reality of world soccer — Europe is still king, but it is an old, sick king. RELATED: Impact’s renovated home will be ready for June 16: Saputo (CLICK) Corradi and Di Vaio could lead oldest attack in MLS (CLICK)
Load More Related Articles
Load More By Steven Sandor
Load More In Uncategorized
Comments are closed.