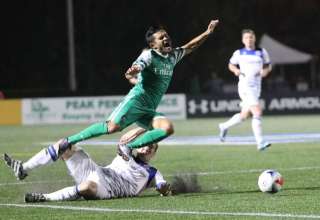 The PR departments of sports teams and leagues can post some ridiculous things; but, earlier this week, NASL made an assertion that FC Edmonton keeper Matt VanOekel is an outsider in the MVP race.

Really? Outsider? If MVO isn’t your top candidate, there’s a good chance that a) you don’t watch NASL games b) If you do watch NASL games, your mind is chemically altered at the time.

Once again, VanOekel showed off why he’s the league’s best player so far this year. He made a series of fantastic second-half saves to help preserve 0-0 draw Saturday at the New York Cosmos.

The Eddies remain five points behind the Cosmos in the fall standings, with a game in hand. But, considering that this was the Eddies’ third game in seven days — away to a team that had won 12, drawn one and lost none at home so far this season — a draw wasn’t a bad result.

After playing Wednesday night, the Eddies were at the airport Thursday at 4 a.m. in order to begin the long journey across the continent. And, late in the game, when the cumulative effect of three games in seven days began to show, that’s when VanOekel was called in to keep things even.

“If someone had offered me a point before the game, I would have bitten their hand off so I could take it,” said Miller. The FCE coach said that, even though the Cosmos are the defending champs and have employed the likes of Raul and Marcos Senna in the past, he feels that the 2016 version of the Cosmos is the best the modern NASL has seen.

Yet, the Eddies can boast that the Cosmos did not beat them in the regular season. The Cosmos lost twice in Edmonton earlier this year.

And two late-game saves from MVO — on consecutive corners — preserved the point. He dove to his far post to deny a headed effort from Sebastian Guenzatti, then on the next dead-ball situation, dove to deflect a volley from Adam Moffat off the post and out.

He also made a good stop on a Jairo Arrieta free kick midway through the second half. The shot was hit with power, and VanOekel didn’t pick the ball up till it got past the wall in front of him.

But, honestly, this is yet another story in 2016 that leads with Matt VanOekel’s goalkeeping exploits. Remember, this was a man who won the NASL Player of the Month for the month of August, in which he didn’t give up a single goal. Yes, it’s easy to understand why those at league headquarters don’t talk about VanOekel as NASL’s top player — every league in the world wants to promote its offensive-minded players over the ones who keep the ball out of the net.

But VanOekel, who has given up 14 goals in 24 games this year(!) isn’t an outsider in any MVP conversation.

MVO’s stellar second half erased memories of a cautious first half, which saw the Cosmos and its league-best offence fail to generate a shot on FCE’s goal. Juan Arango did strike the bar with a free-kick effort.

For the Eddies, Sainey Nyassi struck the outside of the post with a shot late in the first half, and Ben Fisk screwed a shot just wide early in the second. Once again, Fisk was the liveliest Eddie, and was the team’s biggest offensive threat in the night. In the previous two games, the Canadian has hit the post. He has yet to score in NASL, but not for lack of trying.

“I never had any grey hair before I started coaching Fiskie,” said Miller. “He seems to be hitting the woodwork all the time.”

But the coach said he’s been impressed with Fisk’s willingness to take on players one-on-one, to shoot, to be creative. The goals will come if Fisk keeps playing this way.