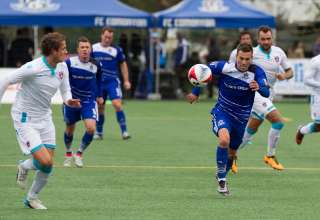 After his contract with second-division Spanish side Coruxa expired, Ben Fisk was at home in Vancouver. It was the summer of 2016, and transfer windows around the world were opening.

His goal was to get back to Europe. After spending time with the Vancouver Whitecaps Residency and the Charleston Battery of the USL, he went to Spain and enjoyed his time at Coruxa, scoring four times in 24 appearances.

But, then he got a call and a familiar voice was at the other end of the lone. Colin Miller had coached him at the Whitecaps. Now the coach of FC Edmonton, and the man in charge of all player-personnel decisions, Miller had an offer for Fisk. Why not give NASL a try?

“I know Colin from my days with the Whitecaps,” said Fisk. “I was waiting at home, looking for something in Europe, but he gave me a call and asked me if I wanted to come out and train for a few days.”

That training stint led to a contract that goes to the end of the 2017 season. And, by the midway point of the North American League’s fall season, Fisk was starting as a left winger for his new club.

When Fisk has the ball at his feet, he’s lively — and he loves to shuffle in off the wing and shoot. In his first two starts, he hit the woodwork in each of the games with efforts from just outside the penalty area.

Fisk is one of several Canadians who have come to NASL after playing in Europe. His FCE teammate, Nik Ledgerwood, came to NASL in 2016. Jamar Dixon left Finland to join the Ottawa Fury in 2016.

“I’ve never had a bad perception of the league,” said Fisk. “For me it’s always been a quality league and I know a lot of the guys playing in it. It doesn’t change things from a quality perspective; I think it’s great to see some familiar faces in the teams here and, training here, it’s nice to have a few guys I know, so I can get into the team and feel at home a bit quicker.”

Fisk has no regrets about his time in Spain. He said his time spent with Coruxa was worth it.

“I think I grew a lot. For me, the biggest difference was the tactical side of the game. I think I became a much more intelligent player, and I consider myself a pretty technical player so I think I fit in pretty well there. I definitely enjoyed my two years there.”

But, why then decide to stay in Canada? Fisk said he’s close with his family, and it is tough to be far away from them. He’ll now have at least till the end of the 2017 season for them to be a short-hop flight away.