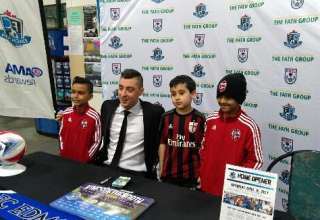 As Nathan Ingham rose up the goalkeeping ranks, he was always the No. 1. It didn’t take long for the Keswick, Ont. native to take over the starting job at Florida Gulf Coast University. He was the man in goal as K-W United won the PDL title in 2015.

But, when he was signed by FC Edmonton in 2016, he had to learn bide his time. No. 1 keeper Matt VanOekel enjoyed the best season in NASL 2.0 history, setting a league record for clean sheets. He was also behind Canadian keeper Tyson Farago. Eventually, he was loaned out to TFC2 of the USL, so he could get some playing time.

In 2017, he had to wait to some more. Former TFC goalie Chris Konopka was the No. 1, and Farago was again second on the depth chart, getting the starts in the Canadian Championship games against Ottawa.

But, on Wednesday, Ingham got his chance, getting his first NASL start — and a 4-2 win over the New York Cosmos. While coach Colin Miller never confirms who will start in goal in the team’s upcoming game, the safe bet is that Ingham will get another chance when the Eddies face Miami FC Saturday night at Clarke Field.

“I’m excited, it’s been a long time coming,” Ingham said after the Eddies trained Friday. “I had my professional debut last year when I was on loan with Toronto, and this was my first NASL game. I had a bit of nerves beforehand, but once warmup started, it was back into the same rhythm. It’s the first time I’ve had 90 minutes since I’ve been here that I didn’t feel lost. I’m a little bit lost on the bench a lot, I don’t know what to do with myself. I feel a lot more comfortable on the field.”

“Overall, I thought he played well,” Miller said of Ingham’s debut. “There was one or two decisions — he’s a young goalkeeper and his game management will need to improve, of course, but that comes from playing games. I thought it needed a change. I thought we gave away some soft goals (in Saturday’s 3-0 loss at Puerto Rico). I’m not blaming Chris, I thought it was a poor team effort.”

“There’s lots of room for improvement,” Ingham said. “My distribution, I need to complete all my passes. Slowing down the game at the right times and doing those things, communication could always be better. I could give you a list of things that I need to improve on. It was a good first game, a good first start, a step in the right direction and I’m just going to keep building on that.”

Ingham admitted that, when he first arrived in Edmonton, he “didn’t handle it the best” when it came to being the No. 3.

“It’s a list of emotions,” he said of not playing. “There’s times where you’re frustrated, times when you’re angry, times where your patience is tested. It’s just coming from places, growing up, where I was always the starting guy and in university I had maybe, two months where I was sitting behind an older guy and I finally won that spot and took over from there. It’s (sitting) not something that I’m accustomed to, and coming into the pros is just a different beast.”

“I was ready to start, the first game of the season I was ready to get after it. Between injuries, and Chris and Tyson are both quality, so, just trying to earn my stripes and finally get there.”

But, “getting there” required a detour to Toronto. And, getting the chance to play with Toronto FC 2, and to train with TFC’s first team, well, that was an eyeopener.

“It was good,” said Ingham. “I spent a lot of time with the first team training. I played some games with the second team. It was where I grew up, as well, so being able to debut in front of my parents and things like that, you can’t beat it. Those are memories you’re going to cherish forever. It was a good time there, I think I grew a lot when I was there, and I was able to bring all that back to Edmonton.”

And, facing the likes of Jozy Altidore and Sebastian Giovinco in training?

“It was fun,” Ingham smiled. “A lot more fun for them than me, I think, in the shooting drills. But you learn a ton and talk to them. Jon Conway, the goalkeeper coach, was a stud. He was really good. Training with (Alex) Bono and Clint (Irwin), you just learn a ton. It was just being a sponge, soaking up everything. It was quality.”