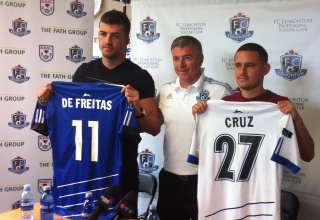 Both were on hand at FCE’s south-side headquarters Thursday as they were unveiled to the media. Cruz — who has played in NASL for the Atlanta Silverbacks and the San Antonio Scorpions — has long been admired by FCE head coach Colin Miller. Thiago is expected to help FCE in the possession department, as giveaways were a massive problem for the team in the spring season, and contributed to the Eddies’ league-worst defensive record.

“We gave away the ball far too easily, far too often,” Miller said.

As for Cruz, Miller called him a “game changer,” a player he wanted make an Eddie as far back as two years ago. He said Cruz will help mitigate the loss of Lance Laing, who is tied for the team lead in goals and leads the team in assists. Laing will likely be on Gold Cup duty with Jamaica when the NASL fall season begins in early July.

“His first thought is to go forward; he enjoys running at people,” Miller said of Cruz.

Cruz said he’s wanted to come to Edmonton for a while. “But, for different reasons, it didn’t work out before,” he said. “But I am happy to be here now.”

Thiago flew in from Rio de Janeiro two days ago. He most recently played for Greek second division side AOT Alimos. He also has played for Israeli side Hapoel Ironi Rishon Lezion FC, and previously played in the Hungarian league for Vasas.

“We have a saying in Brazil that a team is like a family,” said Thiago, who speaks five languages. “A family cares about each other.”

With the signing of Thiago, FCE is once again maxed out with its permitted seven international roster slots. Miller did bring up the possibility of bringing one or two more players — and had previously stated that one of the targets would likely be playing at the Gold Cup.

FC Edmonton begins its pre-fall-season training camp on Friday, and Miller said he’ll be bringing the “belt” to the first training session. He said he’s dismayed that the team has averaged giving up more than two goals per game so far this NASL season.

“It’s been very disappointing, given my background as a defender, to give away such comical goals,” he said. When he looks back at the video of the goals the Eddies have conceded, the mistakes have been so farcical that Miller said he felt like kicking his laptop out the window.

But if there has been one bright spot on defence, it was Canadian national-team coach Benito Floro’s decision to bring centre back Mallan Roberts into World Cup qualifying. Roberts got his first cap earlier this week in a qualifier against Dominica — and is also on the preliminary Canadian Gold Cup roster.

Miller said that FCE doesn’t do enough to trumpet its own achievements – that it should be proud of the fact that a player that came up through the academy ranks got the call-up. Unlike the two other NASL players on the Canadian roster — Julian de Guzman and Nana Attakora, who had extensive MLS and/or international résumés — Roberts is an NASL player who is the product of an NASL academy.

Miller said it should be a cue for Roberts to work harder than ever, because Canada is quite deep at centre back.

“He still has a lot of work to do, he’ll be the first to admit that,” said Miller. “But this carrot has been dangled in front of him, and now he knows he has to work harder than he’s ever worked in his life.”