May 16, 2022
9 New Articles
Home Global Game CONCACAF The super-optimistic match report: Why Larin and Akindele will lead us to Russia! 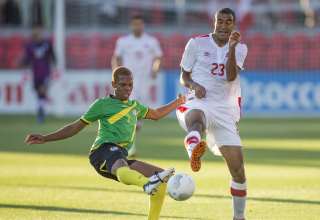 It’s 2018. Canada is about to play its first match of the World Cup. A few of the Voyageurs are in the stands in St. Petersburg. FIFA Emperor For Life Sepp Blatter the First watches from the delegates’ box.

Russia of course, re-won it’s right to host the World Cup when FIFA took another vote. It received unanimous support — that is, from the delegates who didn’t abstain.

The Canadian team is introduced, with Cyle Larin and Tesho Akindele at the top of the formation. The Voyageurs sitting in the nosebleeds reminisce about the long qualifying campaign that led to this point. They wax poetic about the goal Akindele scored against the United States in the Hex; they also recall Larin powering through a group of Honduran defenders and then quieting the crowd in San Pedro Sula.

And, as the kickoff is taken, the Canadian fans watching in the stadium, and the millions back home hearing “The Voice of Canada,” Gavin Day, call the game, are thinking the same thing: We’re here. In a World Cup. And we might actually score.

And we do. A ball crosses the line, the linesmen’s flag stays down, and the referee points back towards the centre circle. There is drinking. Maybe a few arrests. A disappearing or two. But heck, we always knew that not everyone was going to come back from this World Cup.

OK, I get it. Canada only just beat Dominica 4-0 (6-0 on aggregate) in the preliminary rounds of World Cup qualifying. Dominica is a country so small, that many commenters watching the web feed of the first leg thought it was the same country as the Dominican Republic.

But sports are about hope? And, at Toronto’s BMO Field, we saw Akindele, a player who we weren’t sure was going to play for Canada or not just a few short months ago, rip a shot from outside the box into goal. We saw Larin, the No. 1 pick in this year’s MLS SuperDraft, turn and rifle a shot into goal in two quick and lethal movements.

And Akindele, from Calgary, laid a pass on a platter for Tosaint Ricketts (from Edmonton) to score the first of his two goals on the night. A made-in-Alberta pass-and-goal that just might make you want to go out and buy the least economical vehicle you can find and convert the exhaust so you can off rolling coal all day long.

To see Canada score from open play — to have multiple options up front — well, it’s been a long time, hasn’t it? Sure, all this victory does is put Canada into another preliminary qualifying round. But one of the reasons we keep gathering to watch our teams play is so we can get together and share one of our most irrational hopes. And, in a match against Caribbean minnows, we can look at two young forwards and say “maybe, just maybe.”

I write this as I watch the stream in the press area at Commonwealth Stadium; Australia and Sweden — in Women’s World Cup action — plays before me on the pitch. I am pretty sure I’m the only guy in press row who has the Canada stream going. And, on a night when the Australian journalists sitting next to me are cursing the cool weather — it’s nice to feel that hope growing in the gut.

And, of course, to see defender Mallan Roberts come on as a sub and claim his first Canada cap — a player I’ve followed since he came into the FC Edmonton ranks from the academy — well it’s just icing on the cake, isn’t it?

I promise, I’ll be cynical and mean in the next thing I write. I know you all expect it of me. But, the first step was a success. An expected success, but mission accomplished nonetheless.