May 28, 2022
9 New Articles
Home NASL & USL FC Edmonton Roberts: The thrill of playing for Canada took a couple of minutes to kick in 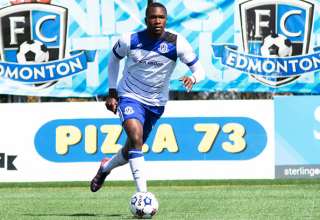 Mallan Roberts came to Canada as a nine-year-old, fleeing Sierra Leone with his father.

It took nearly 14 years for him to get his citizenship. And, shortly after, his first Canada call-up. This past week, late in the second half of Canada’s 4-0 win over Dominica in World Cup qualifying, national-team coach Benito Floro sent Roberts onto the pitch at Toronto’s BMO Field.

One could only imagine what was running through Roberts’s head as he sprinted onto the pitch. Well, believe it or not, there wasn’t a flood of emotion as he headed to his spot in the centre of the defence.

“It really took a couple of minutes on the field for it to really kick in,” Roberts said Friday, as FC Edmonton trained north of the city in St. Albert. “Once I got past that, was able to make a couple of plays, then it really began to feel good.”

Roberts was called into the Canadian camp as a replacement for the injured Dejan Jakovic. But Roberts has also been placed on the 35-man preliminary roster for the Gold Cup — so he’s hopeful that he’ll be wearing the Canadian jersey in short order.

“I don’t want to be the player who was only called into one game,” he said. “The experience, it was huge. I gained a lot of experience from it. There are so many players there who have careers in Europe, from around MLS and other teams in North America. I can see what I want to become, where I want my career to go, what I need to do.”

In the spring, when FC Edmonton was visiting the Ottawa Fury, Eddies coach Colin Miller met with Floro, and he brought up the name of several FCE players who he thought could help the national side.

“He’s taken real notice of the standard of the league [NASL],” Miller said.

Roberts then got the call. And, two weeks ago, FCE midfielder Hanson Boakai was informed he would be representing Canada at the Pan Am Games. The official announcement was made Friday. Boakai said he will be leaving to join the national side on July 5.

But, now that Roberts has got that first cap, he’s asked if he looks back and thinks about what it took to get to the national team, including the long wait for citizenship. In fact, last year, before the passport arrived, he said that he might entertain a call-up from his native Sierra Leone. Of course, getting into a World Cup qualifier for Canada kills the Sierra Leone speculation dead, dead, dead.

“I’m really not the kind of person who likes to dwell on the past,” he said. “I’m the kind of person who likes to look forward not back. In the past, I’ve had some ups and downs. But, even though I like to look ahead, I am very proud of where I’ve come from. I’m grateful to my Hussein Shabdi, my father, my mom for giving birth to me, Jeff [assistant coach Jeff Paulus] for believing in me and bringing me into the academy, and Colin for bringing me into the pro team.”

Why was Hussein Shabdi listed so prominently? He’s the technical director at Xtreme FC, one of Edmonton’s elite developmental clubs. He took Roberts under his wing, and, even though the boy has grown into a man, Shabdi still takes the extra time out of his schedule to work with the defender. Roberts says that Shabdi is like “another father” to him. When he got to the pro level, he gave his first jersey to Shabdi.

“I hope one day to be a coach,” he said. “But before you can coach, you have to learn.” And he says he’s continuing to learn the game; from FCE, from Shabdi, from Floro and his staff. In fact, he says the learning curve is steeper than it’s ever been, because he understands it’s exceptionally difficult to hang on to a national-team shirt.

Meanwhile, FC Edmonton began training for the fall season with far less than a full complement of players.

Forwards Frank Jonke (hamstring) and Daryl Fordyce, with a suspected hernia, weren’t on the field. Defender Kareem Moses is out with a sprained MCL. Both defender Albert Watson and midfielder Tomas Granitto are on the way back from concussions. Winger Michael Nonni has the flu. Midfielder Sainey Nyassi is still nursing a bad ankle. Forward Tomi Ameobi should be back soon after suffering a foot injury almost a month ago.

Miller joked that a triage unit could have been set up at the team’s practice field in St. Albert.