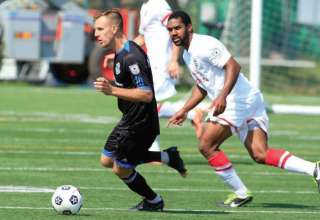 On Saturday afternoon, FC Edmonton’s Neil Hlavaty will have a sort-of homecoming.

Hlavaty will be in the state of Minnesota, playing for the first time against his old team. But it won’t be all familiar — since Hlavaty left the Minnesota Stars and signed with FC Edmonton as a free agent late in 2012, his old team changed its name to Minnesota United FC and went to a sky-blue home kit. (The strangeness of a team with the initials “MUFC” wearing sky blue jerseys could be discussed for days on end). And, Saturday’s game will go in the Metrodome, a place where Hlavaty and the Stars only once last season.

“It’ll be interesting,” said FCE’s holding midfielder. “I have played in domes before, but it’s interesting to play in one that has 60,000 seats. And even though we’ll have a good crowd for the game, in a stadium that size it will feel kinda empty. But I still think there will be a good atmosphere. And any time you can play in a major stadium, it’s a treat. Just like it will be special to play next week at Commonwealth (when Edmonton hosts the Whitecaps in the Amway Canadian Championship).

“The turf at the dome isn’t the best in the world. But they have to play on it, too.”

And, since MUFC doesn’t train at the dome, the conditions will be strange to both the home and road teams.

Minnesota began the season with a draw against San Antonio, then a bye last week. With the additions of the league’s past two MVPs — Pablo Campos and Etienne Barbara — as well as former Eddie Bryan Arguez in midfield, the team has established itself as co-favourites for the NASL spring season title, along with the defending champion Tampa Bay Rowdies.

But Hlavaty said FCE can’t be dazzled by the spending power of the new MUFC ownership.

“They definitely brought in some established players,” he said after FCE’s Thursday afternoon training session at the under-renovation Clarke Stadium. “But that doesn’t put pressure on us. We just have to worry about us, we have to do our jobs on game day.”

The Eddies have one point through two road matches. And, the team plays four of its first five on the road. Knowing how hard it is to take points on the road in NASL, you could argue that all FCE has to do is tread water in the early part of the season and then try to make hay when it gets a home-heavy schedule later in the spring session. But Hlavaty said the Eddies can’t fall too far off the pace, too soon.

“You definitely don’t want to put yourself in a hole. Because then you put a lot of pressure on yourself that you need to win all of those home games later in the season.”

While Campos is a big name, he won’t play on Saturday. He is still serving a suspension for his playoff headbutt that, ironincally, allowed Minnesota to beat San Antonio in last year’s playoffs. Then a member of the Scorpions, Campos head-butted Kyle Altman (right in front of Hlavaty, too) and was sent off while his team held a 1-0 lead over the Stars. With Campos gone, the Scorpions gave up two goals and lost the playoff series, and that spelled the end for the MVP striker in San Antonio.

“Missing Campos, he’s one of the most talented strikers in the league, so they will miss that,” said FCE coach Colin Miller. “When San Antonio played Minnesota, it was two very good teams having a bash at each other. And I hope that’s what happens this week when we play them.”

Miller confirmed that new acquisition Robert Garrett, on loan from Linfield FC, will be on the 16-man traveling squad. And Chris Nurse, who missed the first two games with a hamstring problem, is also OK to make the trip to the snowy Twin Cities.

A lot of dirt has been cleared around the pitch at Clarke, as the team readies to bring in 3,000 new seats into the venue. The team has targeted the May homestand as the launch date for the new, improved Clarke, as the late winter has hampered construction. But there has been some progress over the last couple of days.

The team has a goal of selling 1,000 season tickets before the start of the home schedule. And while the number stood in the neighbourhood of just 400 on Wednesday, news was that Thursday was a busy day for the ticket sellers. While the number is short of the goal, it does represent a higher amount of season-ticket holders over last year.