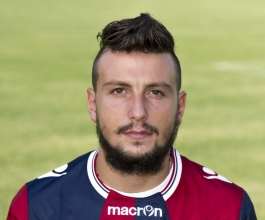 On Friday, MLS let fans and media know about a new league policy that’s actually been in place since the start of the season — that players under the age of 24 can be loaned from MLS club to MLS club.

On that same Friday, the Impact added its fourth international on-loan player of the season (who needs domestic loans???), finally announcing a deal with Bologna had been completed for forward Daniele Paponi. The striker, now 25, made four appearances for the Italian U-20 side. He’s been in the Impact camp for weeks, and the move has been expected for some time.

“He is a player that can add a lot of offensive depth to our roster,” said Impact sporting director Nick De Santis in a release issued by the club. “He has qualities and a profile that differ from Marco Di Vaio and Andrew Wenger. He plays well with his back to goal, he’s very intense and possesses many characteristics required to be an MLS player. He is still very young and could become an important piece of this team in the future.”

Veteran midfielder Andrea Pisanu and South Americans Andres Romero and Maximiliano Rodriguez are also on loan to the Impact.

Pisanu also came to the Impact via a deal with Bologna.

The loans represent four low-risk options for the Impact. There are no long-term commitments, and the club can take a wait-and-see tack with all of the players on temporary deals. With a team that has an aging core of players, but some exciting young Academy prospects making the move up the ranks, the loans offer a strategic bridge between the younger and older players.

No one has taken advantage of the MLS-to-MLS loan rule, yet. But the Impact continues to snap up loan prospects from abroad.

Bologna confirmed on its website that the loan term lasts till December 31, and that the Impact will have the opportunity to sign the player outright. In fact, Bologna didn’t use the term “loan,” but “transfer on a provisional basis.” So, for De Santis and co., it’s a case of try before you buy.