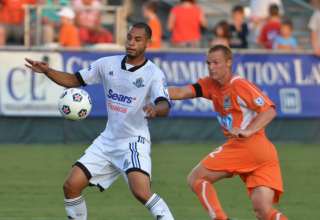 FC Edmonton blew two leads — then gave up a stoppage time game winner in a 3-2 loss on the road to the Carolina RailHawks which dealt a major blow to the Eddies’ playoff hopes.

Right after the clock hit the 90-minute mark, Carolina substitute Ty Shipalane skipped through a series of chances, danced through the middle of the FC Edmonton defence, and then slipped the winning goal past FCE keeper Lance Parker.

The Eddies came into the match trailing the RailHawks by four points for the final playoff spot in NASL. After Paul Craig and, later, Kyle Porter, scored wonder goals to give FCE the lead on two separate occasions, it looked as if the Eddies would be good to get that gap to one. Instead, that gap is now seven between the Eddies and the RailHawks and Minnesota Stars.

“You get to a point in the game where we score, we have taken the lead, we are dominating possession,” said Porter. “And then it was like we just dropped. And the game just changed. And then they get the goals, and the winner came so late, there was no chance for us to come back.”

“When you take the lead twice, you have to hold on for the win,” said Craig. “But we were also very unlucky. I don’t think we deserved to lose tonight.”

With FCE leading scorer Shaun Saiko out with injury, and three-goal man Yashir Pinto also not on the trip, it would have been easy to figure that FCE — which has averaged less than a goal a game —would have needed to grind one out in Cary, N.C. Instead, the Eddies took advantage of a lethargic, static Carolina back four which, just two weeks ago, gave up eight goals to San Antonio.

Less than 10 minutes in, Craig pounced on a loose ball behind the back four, and smacked a shot with the outside of his foot that gave Carolina keeper Akira Fitzgerald no chance.

“I got onto the loose ball, and it was bouncing,” said Craig. “I was able to turn on it and I saw that their goalkeeper wasn’t set. I knew if I got the shot off he wouldn’t be able to leap very high to stop it.”

Craig also said playing on the pristine grass surface in Carolina — widely recognized as the best field in NASL — was a big difference. The ball moves quicker, the passes are truer than you’d get on Edmonton’s artificial surface.

But, Carolina got the goal back midway through the half, as Nick Zimmerman, who has been a constant thorn in FC Edmonton’s side over the last couple of seasons, blew past centre back David Proctor and smashed a shot low, just inside keeper Lance Parker’s far post.

Edmonton could have had more goals in the first half, as the Eddies had some success finding runners latching onto through balls played behind that static Carolina back line. Serisay Barthelemy pushed a wonderful ball for Craig, but Fitzgerald charged out of his area to make a sliding challenge to take the ball off the Prince Edward Islander’s feet.

The RailHawks saw two golden chances fall to former New England Revolution forward Zack Schilawski; a header forced Parker into fingertip save. Later, Schilawski rounded Parker and the ball bounded toward an open goal; but was cleared away by sprawling FCE defender Paul Hamilton, back from a head injury suffered two games ago against Minnesota.

Porter gave the Eddies the lead with a goal that reminded fans of the kind of goals he scored early in 2011, when he was one of the hottest forwards in NASL. He rushed in off the right wing, cut inside, got to the top of the box, and smashed a shot inside the post.

“The centre backs had been playing me physical all night,” said Porter. “But this time I got a little bit of space, and took the shot quickly.”

But Carolina tied it with 10 minutes left. A low cross by Mike Palacio bobbled off Hamilton, and Schilawski got to the deflected cross. And this is where it got interesting. There’s still a month and a half left on the schedule, and Carolina has five matches remaining left against the top three teams in the league. Carolina still has to come to Edmonton. Really, keeping the gap at four points wouldn’t have been such a bad thing. But, after swapping Craig out for striker Michael Cox, a like-for-like change, Sinkgraven brought in Matt Lam — an attacking midfielder — for Chris Kooy — a holding midfielder. He then brought in striker Elvir Gigolaj for Adam West, another defensive midfielder. Edmonton pushed forward for the third goal, rather than trying to hold what it had.

Why push when a draw wasn’t such a bad result?

And, Zimmerman had an 89th-minute effort that he headed in the back of the net ruled out for offside. Carolina sent a warning before the goal came.

“If I had any hair it would be gone by now,” RailHawks coach Colin Clarke told his team’s broadcast crew after the game.

“We have to take our lessons from this game,” said Porter. “And we have to grow from it.”