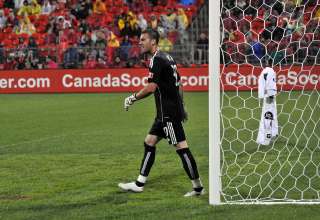 Toronto FC did well to defend against an onslaught of quality chances from Sporting Kansas City, but it was one bad bounce that doomed the Reds in a 1-0 loss on Saturday at BMO Field.

After TFC held the Eastern Conference leaders scoreless through the first 83 minutes, it was a 30-yard free kick from Kei Kamara that put Sporting ahead.  Kamara’s kick appeared to take a deflection off of Toronto’s Andrew Wiedeman that sent the ball arcing past the wall and inside the right post on an angle, past diving goalkeeper Milos Kocic.

“It took a deflection and hampered the keeper as well,” said defender Darren O’Dea.  “It doesn’t need to be pretty, but you need to come away with something.  I think that was probably our best spell in the game as well.”

Ten of TFC’s 43 goals allowed this season have come from in the last 15 minutes of games, the most the club has allowed in any 15-minute period.

Given that KC outshot the Reds by a 17-6 margin (8-2 in shots on goal), it was perhaps just a matter of time before Sporting finally broke through.  While SKC had more chances, however, it seemed as if Toronto would grind its way to a point given that neither side looked particularly impressive over the course of the game.

Mariner made a point of noting Kocic’s several big saves in the game, rather than focusing on the goalkeeper’s possible mistake on preventing the Kamara free-kick goal.  Indeed, Kocic was the hero of the first half for TFC, leaping to stop a long-range shot from Seth Sinovic in the 19th minute and blocking an attempt from Teal Bunbury following a long outlet pass that sprung the forward towards the net.

The Reds’ attack, meanwhile, always seemed to have one pass too many or one pass too few in creating scoring chances, not really generating any solid pressure until the second half.  Eric Hassli had a decent chance on a header in the 54th minute that went wide and Ryan Johnson got a touch on a long free kick from past midfield in the 71st minute that went just over the crossbar.

Once Kansas City scored, TFC had one final shot in stoppage time as Torsten Frings got a piece of an Ashtone Morgan cross but Sporting goalkeeper Jimmy Nielsen was there for the clean sheet-preserving save.

O’Dea made his debut in a Toronto shirt and, as advertised, the centre back stood out as an organizing force on the back line.  The game capped off a busy week for O’Dea, who played 90 minutes for Ireland on Wednesday in an international friendly against Serbia and then had to take a pair of long flights from Belgrade to Dublin to Toronto.

“It’s been a tough week but people work nine to five and I wouldn’t want to be doing that,” O’Dea joked.  “So I’m happy to be flying around the world playing football matches.  I’m tired but it’s not a big deal.”

O’Dea was paired with Richard Eckersley in the middle with Morgan and Doneil Henry on the wings, but that alignment was shifted early when Henry left the game in the 36th minute.  According to Mariner, Henry has been suffering from “a little bit of a puffy knee” and it finally impacted him on Saturday.  Henry will undergo an MRI to discover the extent of the injury.

“Doneil’s been training and playing with it but he said when he turned [on it] today, he said he didn’t have it.  So hopefully we’ve caught it early,” Mariner said.

With Henry possibly out for Wednesday’s game in Columbus, Mariner may again have to shuffle his back line, though the coach said that Eckersley’s versatility at both right back and in the middle helps with putting together a defensive corps.  Dicoy Williams, Adrian Cann and Logan Emory were available for selection on Saturday with Emory coming into the game as Henry’s substitute.

This is the second time that TFC has lost to Kansas City this season, after dropping a 2-0 result on June 16 at Livestrong Sporting Park.  The Reds will take one more trip to Kansas this season to face SKC on September 1.

That game in Kansas City is the last of three straight road matches in league play for Toronto, with a CONCACAF Champions League home game against Santos Laguna sandwiched in between on August 28.  Despite the tough upcoming schedule and TFC still in last place overall in MLS, Mariner said his team’s recent form has given him hope for a strong finish.

“If we keep playing the way we’ve been playing….we’re not in a horrible spot,” Mariner said.  “We are if you look at the table but as far as we’re looking down the line, it’s not horrible.  I want players to be comfortable in the system and I want the fans to think we’re trying, and we’re trying.”