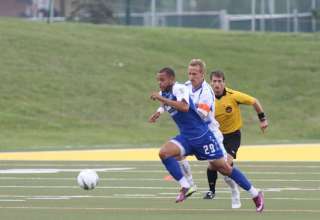 Ding dong, the witch is dead.

That’s how FC Edmonton’s players and supporters feel after they broke their jinx against the Montreal Impact, winning 1-0 at Foote Field Sunday on the strength of a Kyle Porter wonder goal.

The Impact are second from the bottom in the NASL standings. FCE is second from the top. Nevertheless, Montreal had won the first two matches between the teams, outscoring the Eddies by a 7-0 aggregate score.

“How big was the win? Massive,” said Porter. “Not only did we beat our rival, but it allowed us to move up in the standings, and get some daylight between ourselves and third place.”

But the 1-0 scoreline didn’t do justice to how FCE dominated this match.

Porter opened the scoring early with a ridiculous 25 yard volley that Impact keeper Evan Bush could do nothing about. Dan Antoniuk rose to knock down a long goal kick, and it bounded over to Porter, who smashed it first-time.

But Porter could have easily had a hat trick by the stroke of halftime. After hesitating in the box to draw Bush to him, Porter slid the ball towards the open side of goal, only to have Impact defender Philippe Billy clear it off the line.

Later in the half, Porter dashed off the right side and smashed a shot off the bar.

“I was getting to the right place at the right time,” said Porter. “And when I got the ball, I was thinking ‘shot.’ Test this keeper.”

Bush also stopped a penalty from FCE’s Chris Kooy after Antoniuk was brought down in the box by Hassoun Camara, who later got a yellow for a flagrant elbow to the back of Chris Lemire’s head. Antoniuk was running away from goal, and Camara bundled into him — it was a silly, silly foul, and Bush bailed him out.

“It was a penalty kick,” admitted Impact coach Marc Dos Santos. “Camara made the foul. I’m able to admit that. But I can also say that (FCE defender John) Jonke had a clear hand ball in the 18, right in front of the linesman. If you whistle one, you have to whistle the other.”

But, because Edmonton didn’t take advantage of the chances, they were left to a nervous final 10 minutes, where the Impact kept thumping the ball into box and looked to get to the ball. Billy came closest to scoring, with his headed effort going just wide of the post.

Still, Montreal was scattered, disorganized and undisciplined in the first half, and looked like a team that’s creativity is, well, just not there.

“We spent a lot of time this week playing to our strengths and figuring out their weaknesses. In the first half it showed. We could have been up by two or three.”

And, in the second half, Hamilton marshaled a back line that had to deal with Montreal’s long-ball attack.

“We did a good job winning the first ball and winning a lot of the second balls, too.”

Dos Santos said the Impact had a hard time adjusting to Foote Field’s bouncy, quick turf. Now that Edmonton has played several games on it, he said the home-field advantage can’t be ignored.

“Tough place to play, in Edmonton. A lot of that has to do with the field. This is a great facility, but this is not a field to play soccer on. We are team that likes to pass, to play the ball on the ground. But you can’t do that here. I compare Edmonton this year to Austin last year. Austin was a totally different team home and away, and a lot of that had to do with their home field.”