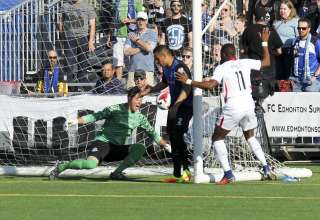 Last week, in a 1-0 loss at San Francisco, the Eddies had a two-versus-the keeper break, and couldn’t finish. Saturday night, at Clarke Field, the Eddies did their best to top it. They couldn’t chances with the keeper out of his net; they missed the net from a few feet out. And, at the other end, an own goal off a set piece would lead to another 1-0 loss.

The expansion Deltas are now 3-0-0 vs. the Eddies this season. FCE has been shout out in each of its most recent three matches.

“It’’s criminal the chances that we’re missing. I’m at a loss for words.”

Before getting to the chances the Eddies let get away, we should start with the seventh-minute goal that would end up deciding the match. A corner kick from Kyle Bekker wafted towards the far post, where Eddies fullback Shawn Nicklaw  tussled with San Francisco forward Pablo Dyago. The ball hit Nicklaw in the back, and then rolled into the goal.

“Shocking marking, shocking defending,” was what Miller had to say about the goal.

“On the road, it’s important to get that first goal,” said Deltas coach Marc Dos Santos. “It calms the team down, gives us some lucidity.”

Then the Eddies had a golden chance to tie the game. Dean Shiels was sprung behind the San Francisco backline, and was onside. All he had to do was beat Deltas keeper Romuald Peiser. But Peiser stretched his leg and got the outside of his foot on the ball, enough the deflect it just wide of the post.

Then, off Ben Fisk free kick, the Eddies got another fantastic chance. A cushioned header from Adam Straith sent the ball to Pape Diakite, who then headed the ball over Peiser. But the ball crashed off the crossbar.

The Eddies’s cavalcade of chances continued into the second half.  Shiels, who was in for for the injured Dustin Corea, got another golden opportunity. Eddies forward Tomi Ameobi got the ball and muscled his way through Deltas defenders Nana Attakora and Reiner Ferrera. Peiser came off his line to charge down Ameobi. The Eddies striker did the right thing; he squared the ball to Shiels, who only had to beat defender Kenny Teijsse, who was standing on the goal line.

Shiels had several feet of space to shoot at on either side of Teijsse; but his blast went right a the defender, who blocked it. Yes, it was a fantastic clearing effort by the Teijsse; but, let’s be frank, Shiels put the ball right at him.

Striker Jake Keegan, who came on as a sub, then headed over the bar from only a few feet away after being set up by Sainey Nyassi, who had burst down the wing and then stopped on a dime to beat defender Jackson Conclaves, who slid past.

The Deltas should have made it 2-0 late; but Eddies keeper Nathan Ingham pulled off an audacious triple save that, despite FCE’s loss, should be a candidate for the league’s play of the week. Bekker got a clear look at goal and fired a hard shot that the keeper blocked. The rebound came right back to Bekker, and Ingham sprawled to get a piece of the second shot. The ball came off Ingham and shot upwards off the bar. Deltas forward Devon Sandoval collected the rebound off the post and had another attempt, but Ingham raced back to block the third consecutive attempt on goal.

Despite his heroics, Ingham wouldn’t take any joy from Saturday’s match.

“We just can’t catch a break. A ball goes off the bar, one gets cleared off the line, it sucks.”