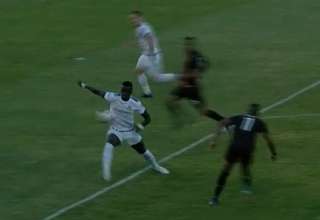 There are games where one teams dominate possession and chances on goal, but lose on a lucky bounce or a referee’s blown call. What should be a championship season is derailed by a key injury.

Over the past two NASL match weekends, FC Edmonton has been reintroduced to those tough lessons.

Two weeks ago, what looked to be a goal from Tomi Ameobi was wiped out by a call from referee David Barrie, who called Ameobi for a push that wasn’t clear on multiple replays. The Eddies went on to lose 1-0 to Miami, and FCE coach Colin Miller had a long chat with the Canadian Soccer Association’s supervisor of officials.

Last week, the Eddies lost 1-0 in San Francisco. The goal came from a penalty after referee Daniel Radford called FCE defender Pape Diakite for handling the ball in the box. But, on further review, it was absolutely clear the ball didn’t come close to hitting either of Diakite’s arms; the ball hit him squarely in the chest.

So, this week, Miller chatted with the NASL about officiating. (To be clear, the CSA assigns referees to games on Canadian soil, and PRO, the American referees’ organization, assigns refs to NASL games on American soil.)

“They got it wrong; the referee got it wrong on Saturday night — and that came from the league,” said Miller. “So, it doesn’t help us at all, but at least we know it’s not anything we could have changed. Referees are human beings; it’s not us against the referees or else you can make it very difficult for yourself as the season progresses. But, I wouldn’t have their job for all the money in the world, to be honest. You’re only right 50 per cent of the time. It’s been disappointing — they’re both good referees, and they’ve made decisions that have gone against us. But life goes on. We still have 22 games to rectify this now.”

Getting things back on track begins Saturday, when the Eddies host San Francisco at Clarke Field. Miller said the team has looked good in training, and looks to be beyond the controversies of the past couple of weeks.

“It doesn’t make it easy, but the players’ response to it has been fantastic. They know we’re playing well, we’re playing as well as we have all season over the last three or four games. We just need a wee bit of a break, and some of these decisions that have gone against us have actually cost us points. Having said that, we had to score in San Francisco before we could say we deserved three points.”

Needless to say, the referee assigned to Saturday’s Deltas/Eddies match will be under a lot of pressure, knowing that the last two FCE games have featured controversies and back-and-forth between the Eddies and the authorities who assign the officials.

Miller said that two players out with long-term injuries won’t be back soon. Fullback Netan Sansara and captain Nik Ledgerwood were working out on the sidelines during Friday’s training session, but aren’t close to returning.

“Netan’s started to do some light training this week, on his own with the trainer,” said Miller. “I still think he’s at least two or three weeks away. It’s a back injury, I don’t want to take any chances at this time, with still so many games left. He’s definitely out, as as well as Ledge. He [Ledgerwood] did some running this morning, which was good to see, because he’s missed quite a bit of football over the last two or three weeks, as well. It’s good to see them back, at least upwards and running. Fingers crossed, we might get them back before the end of the spring season. But I am thinking we might be looking to the start of the fall season for those two.”

Miller said he’s already looking into bringing one or two new players into the fold in time for the fall seasons, “to freshen up the squad.”