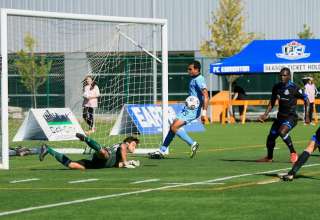 No, the FC Edmonton owner wasn’t talking about a new signing when he spoke to the media on Wednesday. He was talking about the playing surface at Clarke Stadium.

Fath addressed the status of the turf at FC Edmonton’s home field — which is a city owned facility — during the press conference to announce Marko Aleksic as the team’s latest signing.

FC Edmonton has put in enough seats into Clarke to more than double the capacity of the facility. Once able to only hold 1,200, it could now welcome more than 4,000 fans. But, while the turf, which has football lines on it, is 10 years old and is scheduled to be replaced, nothing is guaranteed as city council has many bills to pay.

Fath said discussions between the city and the club are ongoing.

“For us, this (changing the turf) would be massive,” said Fath. “Last year, we had live national broadcasts on Sportsnet 360, through our own production company, M31. And one of the biggest concerns Sportsnet had was the lines.”

Fath said it would be “significant” for “fans to see the game without lines on it.”

As Clarke Stadium is a public facility, it is a multi-use facility. And while the venues haven’t been officially announced, it is targeted to be the venue that FC Edmonton not only uses for NASL play, but for the Amway Canadian Championship as well. In the past three seasons, the Eddies have used cavernous Commonwealth Stadium for the Voyageurs’ Cup matches, because of the need to play games on a surface without markings for other sports.

Last year, there was an experiment done to paint over the football lines for soccer matches. But, in the spot where the test was conducted, the paint only served to make the turf feel like an SOS pad.

The key is a new surface which wouldn’t have football lines for soccer matches, but could have lines painted on it for football games. Amateur football clubs do use the facility; in fact, they affect the NASL schedule. Because there is no football on Saturdays, FC Edmonton’s spring schedule is mainly filled with Saturday evening home games. But the fall season has the Eddies playing Sunday afternoon home matches, as the football teams take over Saturdays at Clarke.