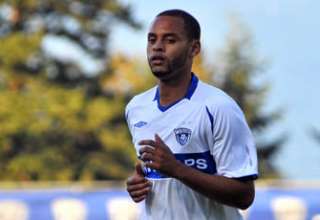 If you would have asked him a day ago, French striker Sebastien Le Toux wouldn’t have imagined he’d be a topic of conversation in Edmonton, let alone Vancouver.

But the Whitecaps’ stunning move for the French forward was a topic of conversation at FC Edmonton practice on Tuesday morning. There’s no doubt that FC Edmonton — with Whitecaps products Kyle Porter, Antonio Rago, Alex Semenets and Paul Hamilton on the roster — is looking at its May 2 Amway Canadian Championshipn semifinal home leg as the biggest match in the franchise’s young existence.

The Whitecaps go to Commonwealth Stadium May 2 and FCE goes to B.C. Place May 9.

“I am already excited,” said FCE forward Kyle Porter, who left the Whitecaps before the start of last season. “It’s going to be the biggest game of my career. I think there will be a great turnout in Vancouver, hopefully 5,000 to 7,000 people here. I think we are going to have a great rivalry.”

And, the addition of one of MLS’ top forwards to the Whitecaps’ mix makes the game all that more intriguing.

Le Toux scored 26 goals over the last two seasons for the Philadelphia Union and was the team’s offensive engine. He’s durable, too — as he didn’t miss an MLS game last season. In the biggest trade MLS has seen since someone named “Dwayne De Rosario” changed addresses, the Whitecaps acquired the striker in exchange for allocation money. Le Toux himself was stunned by the deal, telling fans on Twitter “”Just got traded to Vancouver! Saddest day for me in my Philadelphia Union story. … Still can’t believe it.”

Whitecaps/FCE, you could argue, has some even better elements for a rivalry than Montreal Impact/Toronto FC. You have four ex-Whitecaps in Edmonton. Last season, FC Edmonton and the Carolina RailHawks had some heated exchanges, including a skirmish in the tunnel. Now that coach Martin Rennie has transformed the Whitecaps into Carolina West, will any of the old NASL rivalry spill over into the ACC?

Maybe. While the ex-Caps-turned-Eddies are counting the days towards May 2, they aren’t bitter. At least they won’t say so publicly. In fact, most of them have really positive things to say about the time they spent in Vancouver.

“Vancouver’s a beautiful city, and I can’t wait to play in B.C. Place,” said Semenets. “I’ve been looking forward to the game since we all first heard that we were going to play the Whitecaps.

“But, there are a lot of people at the club (Whitecaps) who I respect and admire.”

Same goes for Hamilton, the centre back who — if Rennie’s squad is healthy and the Scottish coach decides to give his “A” team a go — could have to marshal a back line against Le Toux, Designated Player Eric Hassli and the slick Camilo, who scored 12 last season.

“But it’s big for me because I went to school there (Trinity Western University in Langley, where Hamilton was named CIS player of the year in his final season), so I have a lot of school friends who will come down to the game. It will be amazing to play at B.C. Place, to play in front of the Southsiders.”

Hamilton might not have to wait till the Vancouver trip to be heckled by the Southsiders. Vancouver’s supporters’ group is planning on sending many people to Edmonton. He’ll likely get his fill at Commonwealth.

But he might be too busy to notice them — with Camilo, Hassli and Le Toux possibly all on the menu.