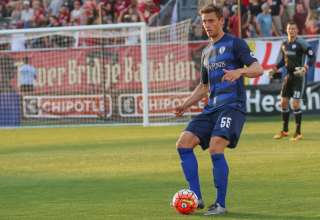 It’s hard to find a major city in Canada that’s more lacking in soccer facilities than Edmonton. There is no option for teams to play on full-size fields through the winter, as a bubble over a pitch (or pitches) is still in the nice-to-have category. There are several indoor-soccer facilities — the turf-and-boards kind — throughout the city, and they are heavily utilized. As a result, futsal is still limited to school gyms and hasn’t developed like it has in Ontario or Quebec.

But, Edmonton, despite the logistical problems its soccer clubs and coaches face, still manages to punch above its weight when it comes to producing talent.

On Wednesday, Sporting Kansas City announced that it had signed centre back Amer Didic to a one-year deal with three add one-year options. Didic joined the team’s USL affiliate, Swope Park Rangers, last season after playing at Baker University. Before that, he was in FC Edmonton’s academy. Last year, Didic got into CONCACAF Champions League action with Sporting Kansas City; but he’s now eligible to play for the big club whenever coach Peter Vermes deems necessary.

What’s interesting is that Sporting Kansas City confirmed that Didic will be classified as a domestic under new MLS rules brought in before the 2017 season. To be a domestic, a Canadian player’s first academy needs to be one that’s “approved” by MLS and the Canadian Soccer Association. So, logic tells us that FC Edmonton’s academy is on that approved list.

Earlier this year, I asked Marc Dos Santos, who coached Didic last year at Swope Park Rangers, about the player.

“For me, I am surprised that he is not playing in Edmonton,” said Dos Santos. “He has the abilities and qualities, in my opinion, over maybe some of the other players who came from their academy and played one or two games for the first team. Now don’t get me wrong. I have a lot of respect for [FC Edmonton coach] Colin Miller and I think he has done a great job there, and it might be a case where Amer needed to develop and wasn’t at that point a couple of years ago. But, this past year, from the first day of training camp to the last day of the season, his development was terrific. Here was a kid who had gone to FC Edmonton’s Academy and had moved on to Baker, a small college. He came to Kansas City on a trial. He goes on to play in a USL final and gets called up for three Champions League games. I think he has the tools to have an excellent future in this game.”

Didic is the fourth Edmontonian in MLS this season.

Shamit Shome, who played with FC Edmonton last season, was given Generation Adidas status, sold to MLS and was taken in the second round of the draft by the Montreal Impact. He has yet to play for the Impact but is on the roster.

And teenage wunderkind Alphonso Davies, whose family is still in the process of getting their passports, has turned heads in Vancouver and has been linked with potential moves to Europe. He could soon be joined by Gloire Amanda, who was called up to the Whitecaps roster for the Canadian Championship. Both Amanda and Davies went to St. Nicholas Junior High, the northeast Edmonton school that’s become a magnet for the Whitecaps’ scouts.

For a city with facility challenges and an extreme winter climate, producing professional-calibre players is indeed a test. And it’s a testament to the clubs, coaches and volunteers in Edmonton who have helped push these kids to achieve more and more with their careers.