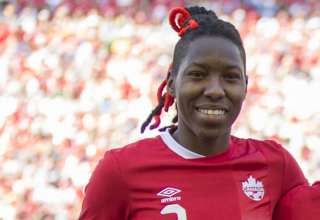 Even though Lawrence converted her attempt from the spot, it was Buchanan and her Lyon teammates who celebrated after 120 minutes of scoreless soccer and then a shootout that was decided by a 7-6 count. The key moment? When PSG keeper Katarzyna Kiedrzynek was asked to go to the spot, and fired her attempt wide.

Lawrence and Buchanan, now regular starters for the Canadian women’s national side, left the University of West Virginia after the 2016 NCAA season so they could kick-start their pro careers in Europe, eschewing the NWSL route.

Both Lawrence and Buchanan played the full 120 minutes in the final.

For Buchanan, who was named the top young player at the 2015 Women’s World Cup and won the honours as the top women’s player in the NCAA last season, the Champions League medal will only add to a trophy case that’s already collapsing under the weight.