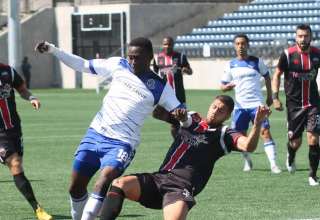 The Eddies are riding a three-game winning streak. The Ottawa Fury sit atop the NASL fall table. The Eddies have beat (in the Amway Canadian Championship) and drawn (in NASL action) the Fury in their previous two visits to the nation’s capital in 2015.

When they meet again Sunday, the stakes will be very high. The Eddies are in a dogfight for the fourth and final playoff spot in the league — a spot which they currently hold on goal difference over the Tampa Bay Rowdies. The Fury are looking to finish with the best overall record in the league, which means home-field advantage throughout the post-season.

Two Canadian teams in the top sector of the league standings. Facing each other, with so much on the line. Pinch us.

“For sure, Ottawa’s form has been fantastic, I take nothing away from them,” said Eddies coach Colin Miller after Friday’s training session. “But we are also playing very well at the moment. And the travelling squad we’re bringing, it’s the strongest squad that we’re capable of putting out.”

Miller says the squad is healthy, with only midfielder Cristian Raudales missing out because of yellow-card accumulation.

Daryl Fordyce, who has scored in each of Edmonton’s last two wins, says that the Eddies won’t be intimidated by Ottawa’s perch atop the standings. The Eddies are in the midst of what could be interpreted as a brutal three-game stretch: Cosmos at home, Ottawa away, then Cosmos away. But the Eddies beat the Cosmos in the first game of the three — albeit against a rotated Cosmos side — and FCE has had a funny habit of playing its best soccer against the top teams.

Fordyce said there’s no reason to fear the Fury.

“Beating New York last week, that just gave us more belief. And we know that if we are going to make the playoffs, we’re going to have to beat the likes of Ottawa, Minnesota and New York. If you want to win a championship, you have to beat the best teams.”

The Eddies’ playoff hopes have been boosted by recent poor runs of form from their rivals for the fourth spot — the Fort Lauderdale Strikers and Tampa Bay Rowdies. But Fordyce said it’s too early to scoreboard-watch.

“It really doesn’t matter yet. If we don’t do our jobs, what’s the point?”

Miller said he believes that there will be many more twists and turns before the season ends in early November.

“Those results [Tampa Bay’s recent loss to Jacksonville and draw with Indy] show just how tight the NASL is. Anyone can go out and take points away from you. And I am sure there will be more surprises; I can see that some of the top clubs could drop points.”

The Eddies knocked Ottawa out of the Canadian Championship in the spring. And, after the lopsided two-legged series, Fury coach Marc Dos Santos brought his team together. They went over everything they were doing wrong. They discussed their defensive shape. And, it was after that defeat that the Renaissance in Ottawa truly began. MDS allows that the loss to Edmonton was the catalyst to their season.

And the rivalry between the two teams is rather, well, unique. When you see the staffs meeting before the two teams play, there are lots of handshakes and warm smiles. The coaches know each other well. And, both Dos Santos and Miller have said it would be their “dream Soccer Bowl” if the NASL final was an Eddies vs. Fury tilt. Truth is, both sets of fans pull for both the Eddies and the Fury when they’re not playing each other. The fans mirror their coaches; they’d love to see two of the four post-season spots taken by Canadian clubs, and then to see them fight it out in the end. In that way, it is a rivalry that’s much different than say, Strikers vs. Rowdies or Cosmos vs. the Rest of NASL.