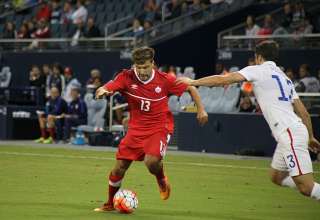 Michael Petrasso (13) in action for Canada.

For long stretches of their Olympic qualifying opener in Kansas City, Canada’s U-23s showed they could go toe-to-toe with the United States’ U-23s.

But, the Canadians were undone by brutal mistakes that would make a U-12 house league coach angry, let alone a manager at the U-23 level. Jordan Morris was the beneficiary of the defensive lapses, scoring the brace as the Americans won 3-1.

First off, the Canadians were absolutely asleep off the opening kickoff. The Americans took the ball right after the opening whistle and, 36 seconds later, Morris headed the ball into the net off about as basic an attack as a team can muster. The ball went up the right wing and American Jerome Kiesewetter must have been as surprised as anyone to find himself in acres of space. He made the cross and found Morris, whose run wasn’t picked up by the Canadians.

Before 40 seconds had expired, the Canadian hopes of hanging in with the host Americans went out the window; all because a group of players started the game like a group of deer caught in headlights. It’s impossible to fault one player on the Americans’ opening goal; you have to fault all 10 men in red on the field.

That wasn’t the case on the second goal. For 72 minutes, the Canadians had done OK, despite that opening goal. The Canadians had created a couple of decent chances to get that equalizer. Caleb Clarke pounced on a giveaway and created a decent chance inside the American penalty area; Chris Mannella had a curling shot stopped by American keeper Zackary Steffen.

But, then any of that momentum (if we can call it that) was halted in the 73rd minute thanks to a giveaway from Samuel Piette, one of the most experienced players on the U-23 squad. At half, he gave the ball away despite having plenty of space and time. One pass later, a long ball sprung Morris past the Canadian back line and he beat keeper Maxime Crepeau.

Canada would get a goal just past the 80th minute to make it interesting; Michael Petrasso cleverly flicked a corner kick into the net with his back to goal. It would be the kind of sly finish that would buoy Canadian supporters, if only our team wasn’t trying it’s damnedest to shoot itself in the foot.

The comedy of Canadian errors came to a climax late in the match, when Jeremy Gagnon-Lapare made an awfully lazy attempt at a challenge on Kiesewetter in the box, and got nowhere close to the ball. Luis Gil scored on the ensuing penalty.

The lapses in concentration — and it has to be said, from some of the more experienced players in the squad — will hopefully become teachable moments for coach Benito Floro. For sure, the video room will be a house of horrors.