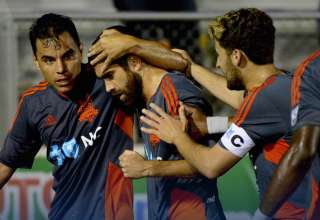 FC Edmonton’s rivals in the NASL post-season race — the ones who have yet to clinch their spots, that is — all endured miserable weekends. Miami FC lost. The New York Cosmos got hammered. Minnesota was beaten by the Ottawa Fury for the second consecutive time.

So the door was open for the Eddies, second in the NASL fall season standings, to make some hay, considering they were facing a Carolina team it had already beaten twice this season. But, instead, a 1-0 loss in Cary, N.C. meant that the Eddies didn’t lose anything in the playoff race, but lost a precious chance to gain any ground on their rivals.

The Eddies remain a point ahead of Miami, but five points behind New York, albeit with a game in hand.

The game’s deciding goal came in the 34th minute after a sustained period of RailHawks’ pressure that the Eddies should have dealt with. Cristian Raudales, starting in the holding midfield slot, got the ball at the top of his own penalty area and tried to play a cute pass rather than get it out danger. The ball was turned back over the home team, and the ball was crossed to Omar Bravo, who laid it off for Da Luz to slam home into the corner of the goal.

“It’s a shocking goal to give away at this level of football,” said FCE coach Colin Miller. “That situation could have been dealt with a lot better, a lot quicker.”

It was the least the hosts deserved; for much of the first half, the Eddies yielded too much space in midfield, allowing the RailHawks to build attack after attack. And, when the Eddies did intercept passes or get the chance to get themselves out of jail, they gave the ball away.

Eddies keeper Matt VanOekel was forced to make a sprawling save on Matt Watson to keep the gap at 1-0 going into halftime.

“In the first half, we weren’t at the races,” said Miller.

In the second half, the introduction of teenager Shamit Shome livened up the Eddies, and the team showed more threat going forward. A clever ball from Ben Fisk found Daryl Fordyce in the Carolina penalty area, but the forward chose for placement instead of power and he couldn’t get through the defensive traffic.

Fordyce got another chance to draw the Eddies level with a drive from outside the Carolina penalty area, but RailHawks keeper Brian Sylvestre came up with his best save of the night, a diving effort.

RailHawks defender Steven Miller was sent off in injury time, receiving his second yellow for late challenge on Adam Eckersley. The Eddies tried to apply some late pressure, but couldn’t get a shot on the Carolina goal.

It now marks the fourth straight game that the Eddies have gone without a goal. The team’s scoreless drought now dates back to Sept. 2.

Miller said that, while it’s frustrating that the team isn’t taking its chances, he feels that the Eddies have goals in them. “We are still creating chances, and we believe we have the players in place who can score the goals.”

Miller said Sainey Nyassi, who pulled his hamstring in Saturday’s game, won’t be available for Wednesday’s match in Jacksonville. As well, he said Shome will return to the starting lineup after helping bring the Eddies to life in the second half.

“He brought pace and he brought energy,” said Miller. “He will start on Wednesday, and there should be one or two more changes.”