May 21, 2022
9 New Articles
Home NASL & USL FC Edmonton Eddies get last-gasp win in Carolina, as post-season race gets so much tighter 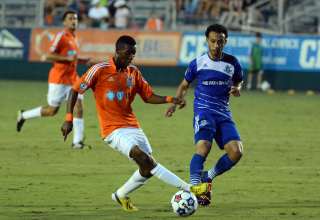 Far too often in FC Edmonton’s history, we’ve seen a controversial call go against the Eddies and the team hasn’t been able to get off the deck. Controversial red cards, penalties, goal decisions.

But, on Saturday, the Eddies rewrote the script. After a controversial penalty call against Edson Edward allowed the RailHawks to tie the game 2-2 on a Zack Schilwaki spot kick, the Eddies didn’t accept that things weren’t simply going to go their way. Instead, they pressed the RailHawks late into the game and into stoppage time.

And, in the fourth minute of five added minutes, Eddies’ substitute Horace James earned a penalty kick after he was ruled to have been tripped as he cut across the top of the box. Neil Hlavaty took — and converted — the last-gasp penalty. Keeper Akira Fitzgerald got a hand to it, but Hlavaty’s penalty had too much power behind it.

The final: 3-2 Eddies. And, with that, the Eddies finish their toughest road trip of the season at 1-1-1, with a draw against the Cosmos, a 3-2 loss away to league powerhouse Minnesota United, and win in Carolina.

With the win, the Eddies now pull within six points of the Tampa Bay Rowdies and the Fort Lauderdale Strikers, who are tied for the fourth and final playoff spot in the NASL. The Eddies have both home and away games remaining against each of those teams. So, the Eddies can actually say they control their destiny; beat those teams and it’s a horse race for post-season spots.

“As we came into tonight’s game, we weren’t looking five games down the road,” said Eddies’ head coach Colin Miller. “We were thinking, let’s take this one game at a time. But tonight was a significant three points for us. At half-time (with the Eddies trailing 1-0) we said to ourselves, ‘we don’t deserve to be a goal down.’ But when we started getting close to our men, and started finding some space outside, we really took control of the game.”

The Eddies got off to a poor start, giving up a goal just 12 minutes in. Lance Parker, making his first start in goal of the season, had to pick the ball out of the net after Schilawski’s near-post header went off the underside of the bar and in.

Miller said some subtle tactical changes were made midway through the first half, to take away some of the gaps the RailHawks were exploting. The Eddies started in a 4-4-1-1, with Chad Burt, getting his first Eddies’ start, playing just behind Tomi Ameobi up top.

Ameobi had a great chance to equalize before halftime, but his shot was parried away by Fitzgerald. On the ensuing corner, the ball just eluded FCE’s Cristian Raudales at the far post.

But the Eddies kept creating chances in the second half; Lance Laing got the equalizer after the Carolina defence scrambled the ball away from Eddie Michael Nonni in the box. The ball came to Laing, who toe-poked the ball through Fitzgerald’s legs and into the goal.

The Eddies then took a 2-1 lead thanks to Ritchie Jones; in the box, he flicked the ball up, then volleyed the ball into the goal. His first Eddies’ goal was a gem.

But, in the 74th, Edward was ruled to have made contact with Schilawski in the area. The two players did touch, but the Eddies felt that Schilawski had gone down on his own. Schilawski beat Parker from the penalty spot, and it looked like the Eddies would once again have to settle for less than three points out of a decent night’s work.

But, then came the call in the 94th minute.

“At first, glance, I didn’t think either was a penalty,” said Miller. “But, I thought that we deserved to win the game.”

Without either penalty, you come up with a 2-1 scoreline rather than a 3-2. And whether or not the late-game decision was a make-up call or not, the Eddies will say they deserved the full three points based on merit.

And, with the playoff race getting so much tighter, it makes next week’s home game against Fort Lauderdale all the more interesting.